Two of the most beautiful Baroque sceptres were created by the Augsburg goldsmith Albrecht von Horn in 1656. They were completed after a model of the Salzburg sculptor Jakob Gerold. The first sceptre displays Salzburg’s, Paris Lodron’s as well as the University’s coats of arms. The second sceptre depicts the university patron saints. Both are topped with the imperial crown and the tiara, as a sign of the dual privileging, by the Emperor as well as the Pope.

The sceptres, on which students make their academic oaths, are carried ahead at every ceremonial act to emphasise the jurisdiction of the rector over the students.

Due to the closure of the Benedictine University (1810), the sceptres were first taken to Munich and then to the University of Würzburg. As late as 1944, the state archivists succeeded in retrieving them to Salzburg.

The university regained them after reconstitution. They are still in use at graduation ceremonies to this day. 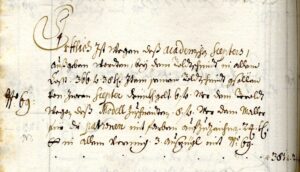 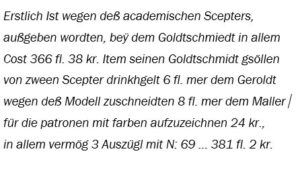 Below the papal tiara, between gilded angelic herms, are the faculty patrons cast in silver: St. Thomas Aquinas (Theology) in Dominican habit, St. Ivo (Law) with beret and scales, and St. Catherine of Alexandria (Philosophy) with wheel, sword and martyr’s palm. Below these are fire-gilded silver enamels in three shields, which were only completed in 1893 during its restoration in Würzburg using vitreous enamel techniques: St. Benedict (Benedictine University), St. Karl Borromäus (uncle of the prince archbishop Marcus Sitticus and patron saint of the university) and Sts. Cosmas and Damian. The latter were popular patrons for medical faculties, but have no relation to Salzburg, where St Luke was venerated as the patron of the medical faculty, which existed for only a few years. 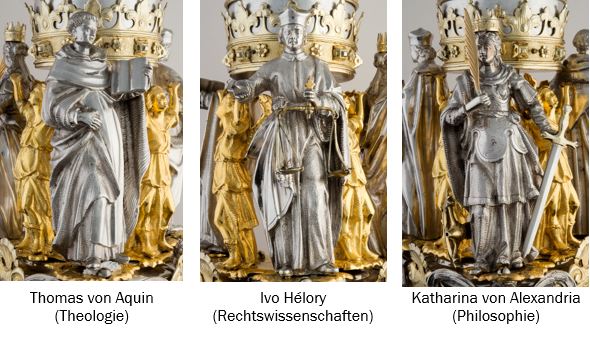 Under the imperial crown are the coats of arms of Salzburg, the noble family Lodron and the Benedictine University. On the latter, the Holy Spirit in the form of a dove radiates a godly wisdom. In-between the two palm branches there is the crowned motto of Charles Borromeo. It reads: HVMILITAS – humility. The acronym PASF stands for Paris Archiepsicopus Salisburgensis Fundator – ‘Paris, Archbishop of Salzburg, Founder’, whose coat of arms can be seen under the legate’s hat with the fiocchi (tassels).