Biodiversity and Evolutionary Relationships of Planktonic Ciliates (Alveolata, Cilio¬phora, Oligotrichea) from the Northwest Pacific Biodiversity Hotspot and the North Atlantic

FWF-Projekt I 3268-B29
The marine plankton comprises a speciose and functionally diverse assemblage of protists (unicellular eukaryotes). Molecular analyses demonstrate that only a small fraction (~ 15–20%) of the entire diversity is represented by known species; the majority of protists have still to be described. Likewise, there are only preliminary data on the global distribution of planktonic protist species.However, understanding of ecosys­tem functioning in a world faced with climate change and ocean acidification urgently requires biodiversity and biogeography estimates in the main plankton components.
The Oligotrichea, the dominant and ecologically important marine planktonic ciliates, connect the microbial loop (polysaccharides secreted by algae via bacteria via flagellates to ciliates) with the phytoplankton-based food web, transferring energy to higher trophic levels, such as minute crustaceans and fish larvae. Assess­ments of their species richness suggest that the South China Sea (northwest Pacific) is a hotspot not only concerning their total diversity, but also because of the huge number of species apparently restricted to this region.
In this first joint project, Austrian and Chinese ciliate experts will discover numerous new Oligo­trichea species in the South China Sea. Investigations on the ciliate’s morphology, ultrastructure, cell divi­sion patterns, and marker genes will provide characters for inferring their phylogenetic relationships. Of spe­cial interest are the endemic species whose placements in the genealogies are often uncertain owing to con­tradicting morphologic and genetic data. Eventually, the findings shall contribute to discover previously misinterpreted, e.g., not inherited from common ancestor, but convergently developed, cell features.
Analyses of short marker gene sequences of all Oligotrichea enclosed in water samples collected at different seasons and climate zones (North Sea, Mediterranean Sea, and northwest Pacific) together with data from previous sampling campaigns available in the web will enable estimates of the species’ global distributions and predictions about changes in the community composition of Oligotrichea and ecosystem functioning with increasing water temperatures, information essential for many regions worldwide whose food supply largely depends on the productivity of the oceans. 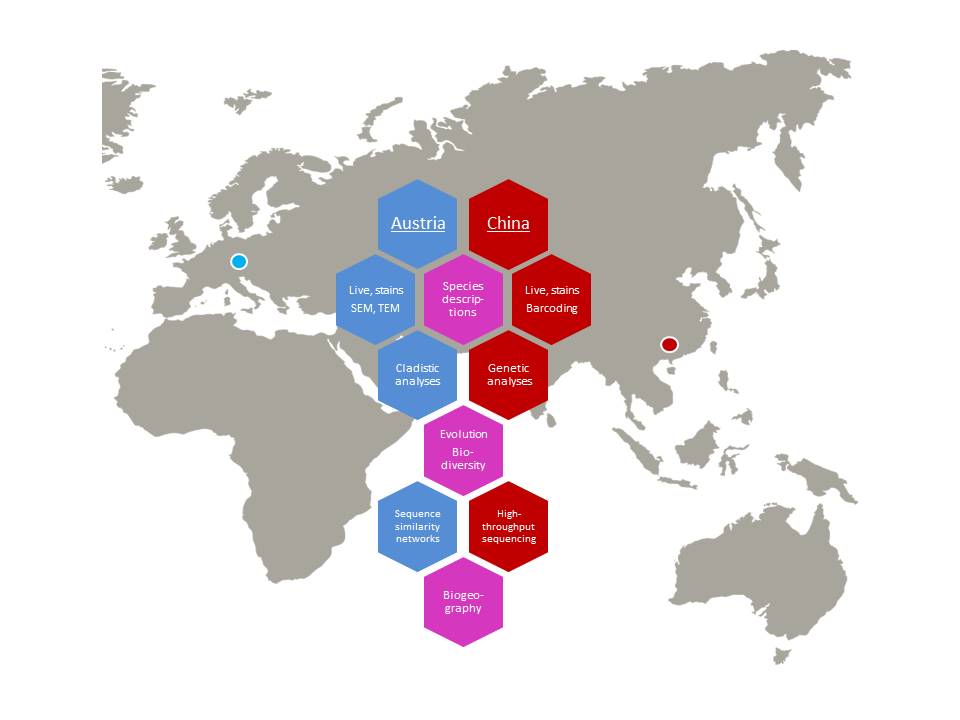