With their decisive role for numerous natural and technological processes which range from nanoelectronics, sensor technology, solid state lighting, catalysis and solar conversion, surfaces and interfaces dominate most physicochemical processes occurring within functional nanomaterials. Interfaces can be engineered to tune the function and stability of nanostructures, but also induce complex assembly at the meso- and the microscale, providing access to a range of new materials.
The group has profound expertise in functional properties of local surface and interfaces within nanostructured solids. This includes:

Various methods are employed to generate pure and nanoparticle composites in the form of dry powders, colloidal dispersions or thin nanostructured films with specific chemical, optical and electronic properties. Furthermore, our research aims at the understanding of growth and stability of these metastable nanoscale solids in order to determine their potential use and reliability under realistic operation conditions.

Nanostructures typically form under kinetic control. The structural and compositional relaxation/ reorganization pathways these metastable solids undergo toward their equilibrium state are often not understood. Understanding such processes is crucial to control stability and performance of functional nanostructures in devices.
Selected Publications: 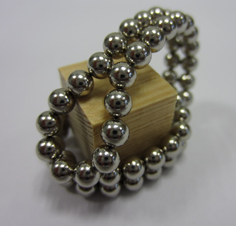 When discussing how the chemical and physical properties of nanoparticle powders differ from those of macroscopic materials, it is common to point to their high specific surface area, the size and shape of the constituent nanocrystals, and the high concentration of surface features, such as steps, kinks, and other low coordination sites. Another defining characteristic of this type of materials is the large number of interfaces between nanocrystals they contain. However, the beneficial and/ or detrimental influence of interfaces on the overall properties of nanoparticle powders has not been studied and is only rarely understood. In this project we explore different possibilities to selectively generate these interfaces and to directly address them by chemistry, light or thermal materials processing. Related activities aim at new means for functionalization and chemical activation of oxide nanostructures and, consequently, at improving performance and reliability for many nanoparticle powder applications.
Selected Publications: 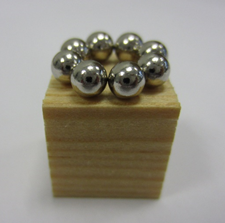 In oxide nanostructures compositional heterogeneity can range from impurity doping of the host lattice to phase separated nanocomposites with multifunctional properties. In this project we aim at the assessment of wanted and unwanted properties of extrinsic defects as well as materials alloying and segregation effects at the nanoscale.
Selected Publications: 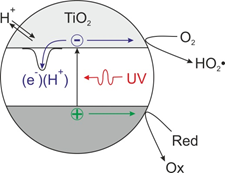 Some material properties depend not only on synthesis and processing parameters, but may furthermore significantly change during operation. This is particularly true for high surface area materials. One example is the degree of hydrogen-doping in mesoporous semiconductor thin films in contact with an aqueous electrolyte, which may change during a photocatalytic process. In situ tracking of such dynamic property changes is very challenging. However, knowledge of the thermodynamic and kinetic details of the underlying microscopic processes is extremely important as they may strongly influence the macroscopic electrode performance. 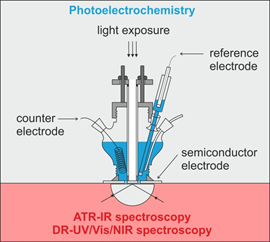 Nanostructured semiconductor thin films as used in photocatalysis, sensors, electrochromic devices and new generation solar cells constitute highly complex systems. Many of the applications of semiconductor electrodes rely on the generation, transport and recombination of charge carriers, which imparts a central importance to electrochemical studies. In our laboratory we combine electrochemical measurements with spectroscopic techniques (UV/Vis/NIR and ATR-IR spectroscopy), which provide complementary, chemically specific information. These spectroelectrochemical techniques allow us to track simultaneously both the integral (photo)electrochemical properties of a nanostructured semiconductor electrode and the temporal evolution of reaction educts and products at the oxide/solution interface in the course of photocatalytic reactions.
Selected Publications: 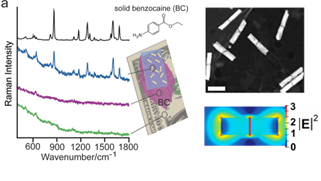 Metal nanostructures can sustain plasmonic resonances that are fully tunable from the UV to the IR range. These materials can be used for enhancing technologically important processes such as surface-enhanced Raman scattering (chemical sensing) or light absorption within semiconductors (solar conversion). We are currently developing smart synthetic strategies to control the integration of plasmonic materials within functional systems.
Selected Publications (* equal contribution):

Growth and organization of nanomaterials 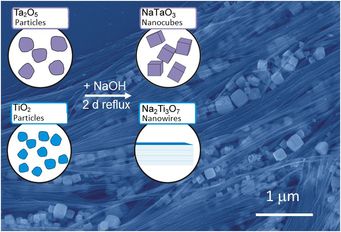 Beginning from intense research on size effects specific to individual nanoscale building blocks the need to arrange metal oxide nanoparticles at the meso- and macroscale has emerged as an important and urgent research topic in current nanoscience. This includes the assembly of nanoscale building blocks over several lengths scales from the nano- to the centimeter range retaining the nanoscale properties in the final macroscopic object or device. As a matter of fact interfaces between the nanoobject and surrounding materials environment emerge from this materials organization step. This project aims at the elucidation of how growth and microstructure evolution different types of interfaces impact the overall ensemble properties in terms of microstructure, optical, electronic and chemical properties.
Selected Publications:

An unambiguous description of the protein adsorption behavior on synthetic nanomaterials on the basis of physicochemical particle properties is complicated by the complexity of the underlying system. We focus therefore on the preparation and study of systems featuring well-defined particle properties. Upon transfer of gas-borne nanoparticles into aqueous dispersion the effect of proteins on the agglomeration and dispersion state of metal oxide nanoparticles and the reverse effect of particles on protein conformation and biological activity are addressed.

An unambiguous description of the protein adsorption behavior on synthetic nanomaterials on the basis of physicochemical particle properties is complicated by the complexity of the underlying system. We focus therefore on the preparation and study of systems featuring well-defined particle properties. Upon transfer of gas-borne nanoparticles into aqueous dispersion the effect of proteins on the agglomeration and dispersion state of metal oxide nanoparticles and the reverse effect of particles on protein conformation and biological activity are addressed.
Übersicht