The collective self-organization of cells into three-dimensional structures can give rise to emergent physical properties such as fluid behavior. Here, we demonstrate that tissues growing on curved surfaces develop shapes with outer boundaries of constant mean curvature, similar to the energy minimizing forms of liquids wetting a surface. The amount of tissue formed depends on the shape of the substrate, with more tissue being deposited on highly concave surfaces, indicating a mechano-biological feedback mechanism. Inhibiting cell-contractility further revealed that active cellular forces are essential for generating sufficient surface stresses for the liquid-like behavior and growth of the tissue. This suggests that the mechanical signaling between cells and their physical environment, along with the continuous reorganization of cells and matrix is a key principle for the emergence of tissue shape.

Skeletal tissues are built and shaped through complex, interacting active and passive processes. These spatial and temporal variabilities make interpreting growth mechanisms from morphology difficult, particularly in bone, where the remodeling process erases and rewrites local structural records of growth throughout life. In contrast to the majority of bony vertebrates, the elasmobranch fishes (sharks, rays, and their relatives) have skeletons made of cartilage, reinforced by an outer layer of mineralized tiles (tesserae), which are believed to grow only by deposition, without remodeling. We exploit this structural permanence, performing the first fine-scale correlation of structure and material properties in an elasmobranch skeleton. Our characterization across an age series of stingray tesserae allows unique insight into the growth processes and mechanical influences shaping the skeleton. Correlated quantitative backscattered electron imaging (qBEI) and nanoindentation measurements show a positive relationship between mineral density and tissue stiffness/hardness. Although tessellated cartilage as a whole (tesserae plus unmineralized cartilage) is considerably less dense than bone, we demonstrate that tesserae have exceptional local material properties, exceeding those of (mammal) bone and calcified cartilage. We show that the finescale ultrastructures recently described in tesserae have characteristic material properties suggesting distinct mechanical roles and that regions of high mineral density/stiffness in tesserae are confined predominantly to regions expected to bear high loads. In particular, tesseral spokes (laminated structures flanking joints) exhibit particularly high mineral densities and tissue material properties, more akin to teeth than bone or calcified cartilage. We conclude that these spokes toughen tesserae and reinforce points of contact between them. These toughening and reinforcing functions are supported by finite element simulations incorporating our material data. The high stresses predicted for spokes, and evidence we provide that new spoke laminae are deposited according to their local mechanical environment, suggest tessellated cartilage is both mutable and responsive, despite lacking remodeling capability. 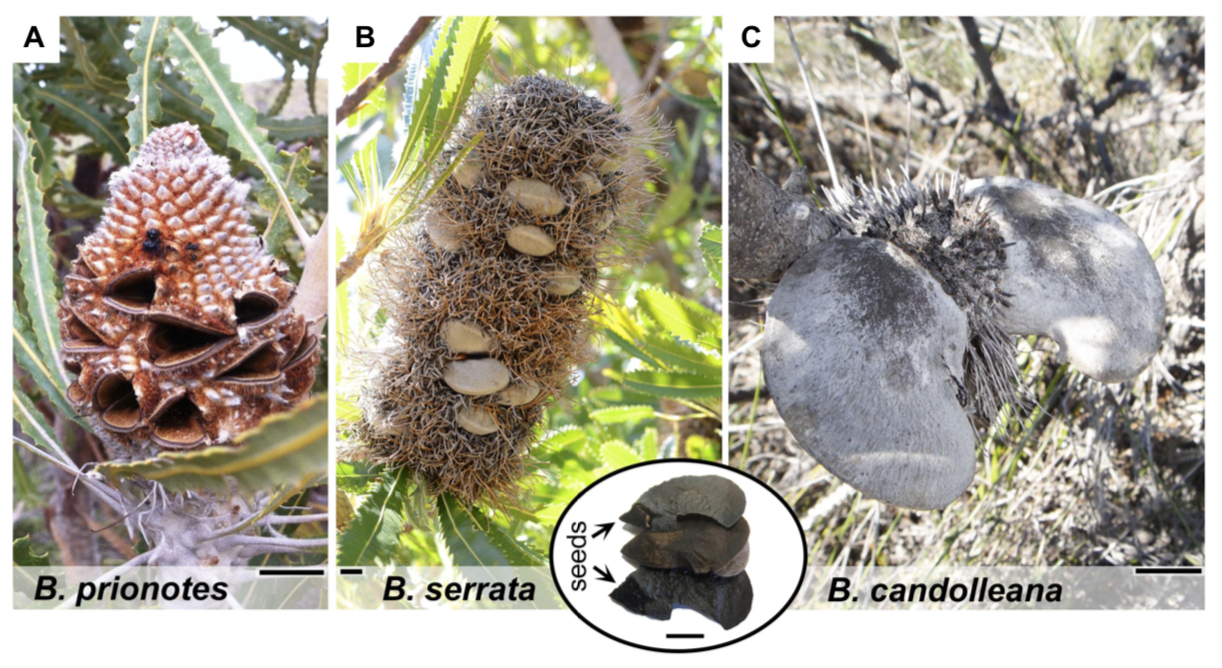 Wildfires are a natural component in many terrestrial ecosystems and often play a crucial role in maintaining biodiversity, particularly in the fire-prone regions of Australia. A prime example of plants that are able to persist in these regions is the genus Banksia. Most Banksia species that occur in fire-prone regions produce woody seed pods (follicles), which open during or soon after fire to release seeds into the post-fire environment. For population persistence, many Banksia species depend on recruitment from these canopy-stored seeds. Therefore, it is critical that their seeds are protected from heat and rapid oxidation during fire. Here, we show how different species of Banksia protect their seeds inside follicles while simultaneously opening up when experiencing fire. The ability of the follicles to protect seeds from heat is demonstrated by intense 180 s experimental burns, in which the maximum temperatures near the seeds ranged from ∼75◦C for B. serrata to ∼90◦C for B. prionotes and ∼95◦C for B. candolleana, contrasting with the mean surface temperature of ∼450◦C. Many seeds of native Australian plants, including those of Banksia, are able to survive these temperatures. Structural analysis of individual follicles from these three Banksia species demonstrates that all of them rely on a multicomponent system, consisting of two valves, a porous separator and a thin layer of air surrounding the seeds. The particular geometric arrangement of these components determines the rate of heat transfer more than the tissue properties alone, revealing that a strong embedment into the central rachis can compensate for thin follicle valves. Furthermore, we highlight the role of the separator as an important thermal insulator. Our study suggests that the genus Banksia employs a variety of combinations in terms of follicle size, valve thickness, composition and geometric arrangement to effectively protect canopy-stored seeds during fire.