Federal Minister Karoline Edtstadler, together with Vice-Rector Martin Weichbold, welcomed Professor Willem Smelik, who will be researching and teaching as a distinguished fellow at the Paris Lodron University of Salzburg (PLUS). The position of distinguished fellow, which was established in memory of the late President of the Jewish Community, Marko Feingold, is a joint initiative of the Federal Chancellery, the Province of Salzburg, the Archdiocese of Salzburg and the St. Peter’s Archabbey. Over the next five years, five renowned scientists will take on this role at the PLUS.

“Here at the Department of Biblical Studies and Church History at the Paris Lodron University of Salzburg (PLUS), we believe that such a position will help to keep the memory of a Holocaust survivor, our Marko Feingold, alive,” emphasises biblical scholar Kristin De Troyer. The first distinguished fellow has just started his research work at the PLUS. Willem Smelik, from University College London (UK), is a professor of Hebrew and Aramaic literature and will give guest lectures at the PLUS, contribute to the course “Introduction to Judaism” and exchange ideas with members of the Jewish Community Salzburg. Among other things, he is an expert in the translation of Aramaic biblical books and deals with the origins of anti-Judaism and anti-Semitism, especially in connection with the Book of Esther, which describes one of the first pogroms against Jews.

“Research is an important pillar in the fight against anti-Semitism, which we have made sure to emphasise in the national strategy against anti-Semitism. The Republic of Austria has a historical responsibility, which the federal government wants to acknowledge. The establishment of the Marko Feingold Professorship, a collaborative effort, is intended to provide new insights into the origins of anti-Semitism and promote international exchange among scholars. After all, only those who understand the origins can also develop effective means against anti-Semitism. With this professorship, I am convinced that the important legacy of Marko Feingold and his lifelong commitment to education and raising awareness of the atrocities of the Nazi regime, especially among young people, can be preserved and further developed. I would like to express my sincere thanks to all those involved,” said Chancellery Minister Karoline Edtstadler. 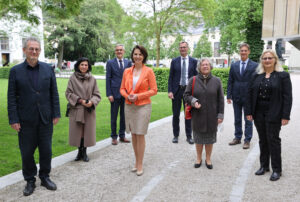