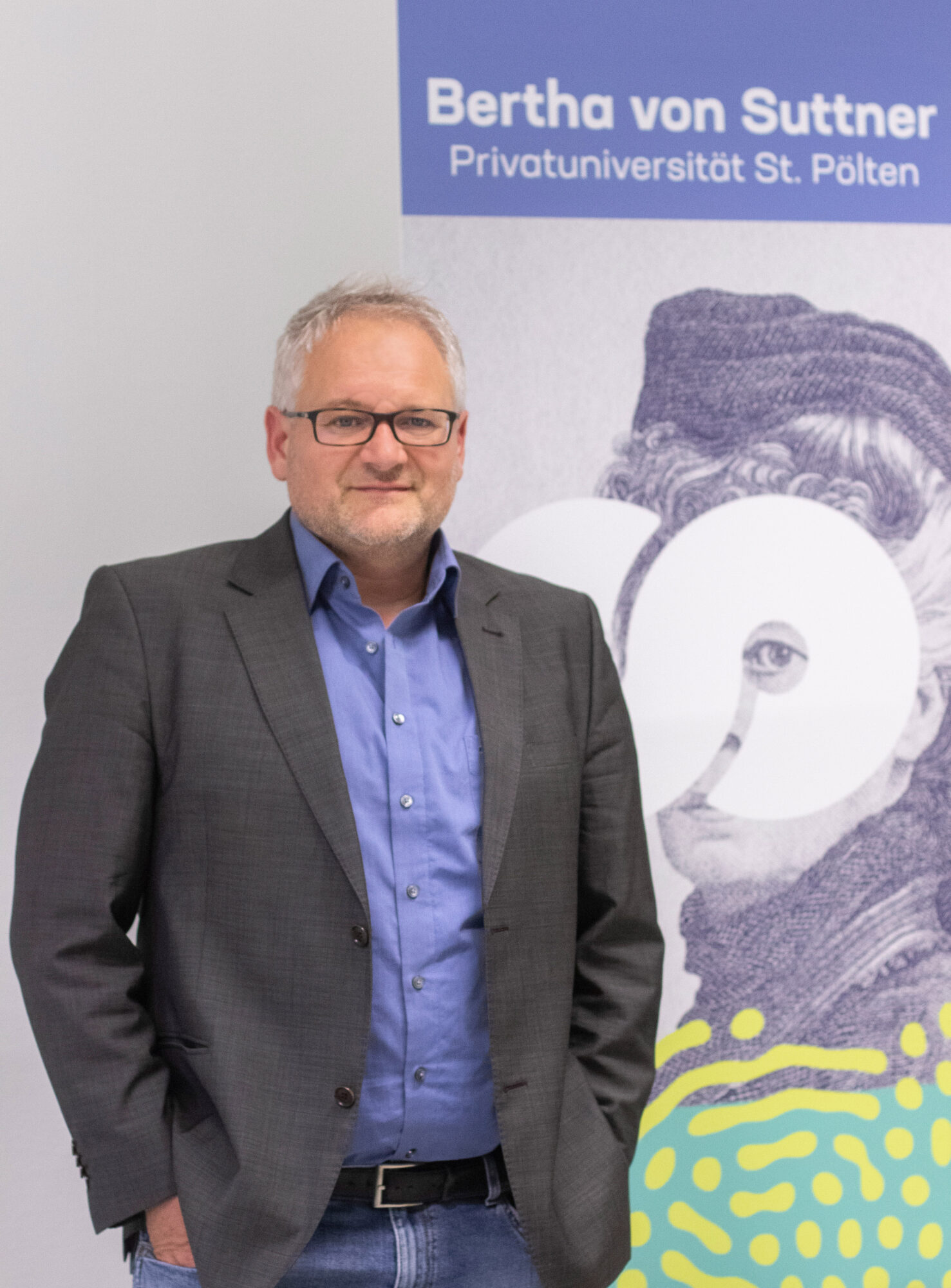 Dr. Eberhard Raithelhuber is a social scientist based in social pedagogy and social work. He has published onchild and youth care, social support and intervention, disadvantaged social groups and social exclusion, youth and young adults, transitions in the life course, regional development and networks, mobilities, refugees, social policy, citizenship and democracy, transnationalism and migration, and agency.

In September 2021 he joined the  Bertha von Suttner Private University St. Pölten as  Professor for Social Intervention and Transformation. Prior to this he was Assistant Professor at the Department of Educational Science of the Paris Lodron University of Salzburg (2014–21). There, he was awarded the „venia docendi” (highest authorisation to teach) for the subject “educational science” in 2019, based on his postdoctoral Habilitation dissertation “Youth Mentoring for ‘Unaccompanied Refugee Minors’ as Social Problems Work‘in Limbo’. A Case Study at the Intersections of Personal Life, Social Support for Marginalized People, and Popular Engagement.” In Salzburg, he served as the departmental Coordinator for ERASMUS and International Mobility from 2015 to 2019.

Together with colleagues at the Universities in Salzburg, Bozen/Bolzano, Klagenfurt, Graz and St. Pölten, he edits the journal „Österreichisches Jahrbuch für Soziale Arbeit – Annual Review of Social Work and Social Pedagogy in Austria.“ He is Co-Editor-in-Chief of this peer-reviewed, open-access journal. In 2018 he became co-editor of the textbook series “Studienmodule Soziale Arbeit” (Beltz Juventa publisher).

Dr. Raithelhuber is familiar with different qualitative methods and is experienced in dealing with issues such as data analysis and interpretations in multilingual and multicultural teams with different national backgrounds.

In September 2021  Dr. Raithelhuber joined the  Bertha von Suttner Private University St. Pölten, Austria, as Professor for Social Intervention and Transformation. There he teaches in the Social Work study program.

From 2014 to 2021 he was Assistant Professor at the Department of Educational Science at the University of Salzburg, Austria. There, he worked mainly in the area of social work/ social pedagogy and served as the departmental Coordinator for the ERASMUS exchange program and interntational staff and student mobility.

From April 2013 to March 2014 he was a professor ad interim (Vertretung der Professur Sozialpädagogik I) at the  Institute of Educational Science, University of Trier, Germany.

As a post-doctoral fellow within the DFG Research Training Group 1474 “Transnational Social Support” at the University of Mainz (6/2011-3/2014) he examined the intersection of the security-migration nexus and the citizenship-migration nexus, with particular focus on transnational and trans-local aspects, amongst others.

Prior to this he was part of a major BMBF-funded research project at the Institute of Social Work and Organization Studies,  LINK University of Hildesheim, Germany (4/2009 – 6/2011) looking at current developments in higher education, amongst other. The project focused on gender, diversity and inequality in new doctoral programs at German universities.

Eberhard Raithelhuber did his PhD at the Institute of Social Education, Social Work and Welfare Studies,  LINK at the Technical University of Dresden, Germany (8/2005-3/2009), There, he also worked as a research assistant (11/2001 – 7/2005) in an empirical project on the transitions of youth and young adults to adulthood and on regional networks supporting school-to-work transitions.

He studied educational science with a special emphasis on social pedagogy at the Eberhard Karls Universität Tübingen, Germany (1993-2001).

In Austria, Mr. Raithelhuber is Secretary of the  Social Pedagogy Section (Sektion Sozialpädagogik, 2015-2021) within the Austrian Association of Research and Development in Education ( ÖFEB). He is also a longstanding member of the German Educational Research Association ( DGFE) as well as of its Subdivision Subdivision Social Pedagogy/ Education and Social Work („Sektion Sozialpädagogik“)  LINK.

In 2016 he became a member of the  IGfH (Internationale Gesellschaft für erzieherische Hilfen e.V.), the German National Section of the  FICE – Fédération Internationale des Communautés Éducatives.

At the University of Salzburg, Mr. Raithelhuber is a member of The Salzburg Migration & Mobility Research Lab (MML PLUS). He joined the Gerontology Network (Netzwerk Gerontologie), established in 2015.

Since 2014, Eberhard Raithelhuber has served as a liaison officer (Vertrauensdozent) for the  department of study grants of the Hans-Böckler-Stiftung, the foundation of the German Confederation of Trade Unions (DGB). In 2014 he joined  GÖD, the Union of Public Services in Austria.

From 2014 to 2016, he was actively engaged in the Romano- and Germanophone  REFUTS-Network, the Réseau Européen de Formation Universitaire en Travail Social (European Network for Academic Education and Traning in Social Work).

Conference Organization and Scientific Board Memberships

Dr. Raithelhuber has co-organized a number of conferences, symposia and workshops, amongst them as a member of the Scientific Board of the REFUTS Colloquium 2015 in Charleroi and 2016 in Brussels (Belgium)  LINK. More details.

Dr. Raithelhuber lived in Southern Mexico for one year where he was engaged in a community-based project for children from families with indigenous background who were living in the slum neighbourhood  LINK. He also lived for one year in Italy where he worked as a volunteer, amongst other activities.

As a citizen and human rights activist, he has cooperated with indigenous social movement organizations in Southern Mexico for fifteen years, including capacity building, advocacy and lobby activities on national, European and international levels. From 2005 to 2014 he was a member of the German Network for Human Rights in Mexico (Deutsche Menschenrechtskoordination Mexiko)  LINK.

External Board Memberships in Research Projects

Member of the International Advisory Committee of the DFG-funded Research Training Group „ Doing Transitions: The Formation of Transitions in the Life Course“ (2nd funding period 2021-2025) at the Goethe University Frankfurt am Main and Eberhard Karls University Tübingen, both Germany.

Member of the External Advirosy Board of the research project „A Mentoring Program for Young Gay Men in Hong Kong: Does a Mentor’s Sexual Orientation Matter?“ (2021-2023), lead by  Yu-Te Huang from the  Department of Social Work and Social Administration at the University of Hong Kong, funded by the General Research Fund (GRF) of the University Grants Committee in Hong Kong, SAR of China.