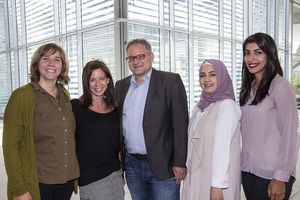 In the Salzburg area, young unaccompanied refugees under the age of 18, who do not yet have a positive decision for asylum in Austria, have been taken care of since the beginning of the research project (August 2015) and are still continuing to receive the so called „basic care“ (Grundversorgung) in residential groups and homes. That is to say outside of the regular child and youth care institutions.
Compared with the established standards expected in child and youth welfare, the social assistance given here is generally far worse. Also, despite being labelled as “unaccompanied refugee minors”, these youths have in general not been placed with foster families. In particular, for many of these young people, the transition to adulthood is a critical moment. Usually their status radically changes. They generally have to leave their residence and often without any future prospects. They face challenges in their lives that they are unprepared for and with which they are left alone.
These mainly male youths that come for example from war torn or crisis areas in Afghanistan, Syrian or Somalia find themselves in very precarious situation.  (Actual numbers and information regarding unaccompanied minors can be found  here in German). Not only their situation in their country of origin and their experiences in migration and flight are responsible for this but also their experiences of how they are treated in their country of arrival. In Austria, national, European and international obligations are repeatedly broken, such as for example the  UN-CRC.  Relevant professional standards in dealing with children and adolescents in emergency and problem situations are undermined, such as for example the positions paper of the Child and Youth Advocacy Offices of Austria from June 2015 (LINK to paper in German).

In the framework of the Pilot project open.heart [ LINK to German project description] the child and youth advocacy offices, Salzburg [Kinder- und Jugendanwaltschaft Salzburg] provided unaccompanied young refugees under the age of 18 with adult mentors as from Autumn/Winter 2015. In addition, in the medium term, some should be allowed to move from assisted residences and primary care homes to families. In the longer term, the project was intended to improve the living conditions for unaccompanied refugee minors in Austria.
The pilot project was scientifically monitored and evaluated by the University of Salzburg, Department of Educational Science, working group Social Work & Social Pedagogy, by Assistant Professor Dr. Eberhard Raithelhuber. In the subject debate, mentoring and sponsorship for young refugees as well as housing with families are considered highly beneficial. However, there are hardly any comprehensive, fundamental findings on this phenomenon, not just in Austria but worldwide.

The accompanying scientific research asked the question what significance such forms of mentoring and family-like living conditions have for the various participants (“mentors”, “host families”, “unaccompanied refugee minors”) for example in the context of transitions in life course. At the same time, the focus was on what occurred interactively in the various social encounters in the pilot project – for example, in the training and further education of the “mentors”.

On the one hand, the research results served to reflect the practical design level of the pilot project. Accordingly, the final project report, which was presented to the project sponsor in November 2017, contains technical, policy and socio-political recommendations for action. On the other hand, open questions about mentoring and foster care for young refugees traveling alone were basically researched and scientifically monitored.

The data collection and evaluation of the qualitative research project was made using a two-fold methodological access to these social realities. On the one hand, biographical constructions were examined by using narrative methods. On the other hand, ethnographic approaches such as participatory observation served to examine negotiation processes, organizational framing and situational moments. Of particular importance for research was the reconstruction of longer developments and processes. Therefore, for example, interview data with the same person as well as data of the observation of participants should be collected at several points in time.

The process perspective on the creation of social realities with the sponsorship between “local adults” and “youths” could be partly seen in the core project (8/2015 to 11/2017).Thus, several mentors were questioned at two points in the context of semi-standardized interviews (t1 as “trained mentors” before getting to know “their” adolescent mentees” and t2 after a few months of mentoring). The interviews showed that the views of the mentors on “their” adolescents and on themselves changed, partly a lot. Over time, categorization patterns and above all a functional understanding of the “task” as a mentor takes second place behind the development of personal relationships.
Due to the till now little researched perspective of mentors involved in mentoring programs for young people – especially in the context of flight or asylum status – the follow-up project will survey about 15 mentors in narrative interviews about 1.5 years after they have taken the sponsorship. The follow-up project will be led by Ass.-Prof. Eberhard RAITELHUBER with cooperation by Amancay JENNY.