Feeding in billfishes: inferring the role of the rostrum from a biomechanical standpoint

Abstract
Perhaps the most striking feature of billfishes is the extreme elongation of the premaxillary bones forming their rostra. Surprisingly, the exact role of this structure in feeding is still controversial. The goal of this study is to investigate the use of the rostrum from a functional, biomechanical and morphological standpoint to ultimately infer its possible role during feeding. Using beam theory, experimental and theoretical loading tests were performed on the rostra from two morphologically different billfish, the blue marlin (Makaira nigricans) and the swordfish (Xiphias gladius). Two loading regimes were applied (dorsoventral and lateral) to simulate possible striking behaviors. Histological samples and material properties of the rostra were obtained along their lengths to further characterize structure and mechanical performance. Intraspecific results show similar stress distributions for most regions of the rostra, suggesting that this structure may be designed to withstand continuous loadings with no particular region of stress concentration. Although material stiffness increased distally, flexural stiffness increased proximally owing to higher second moment of area. The blue marlin rostrum was stiffer and resisted considerably higher loads for both loading planes compared with that of the swordfish. However, when a continuous load along the rostrum was considered, simulating the rostrum swinging through the water, swordfish exhibited lower stress and drag during lateral loading. Our combined results suggest that the swordfish rostrum is suited for lateral swiping to incapacitate their prey, whereas the blue marlin rostrum is better suited to strike prey from a wider variety of directions. 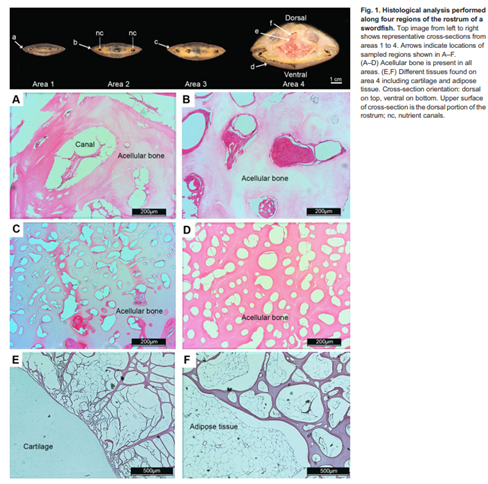