Abstract
Myofibroblasts orchestrate wound healing processes, and if they remain activated, they drive disease progression such as fibrosis and cancer. Besides growth factor signaling, the local extracellular matrix (ECM) and its mechanical properties are central regulators of these processes. It remains unknown whether transforming growth factor–b (TGF-b) and tensile forces work synergistically in up-regulating the transition of fibroblasts into myofibroblasts and whether myofibroblasts undergo apoptosis or become deactivated by other means once tissue homeostasis is reached. We used three-dimensional microtissues grown in vitro from fibroblasts in macroscopically engineered clefts for several weeks and found that fibroblasts transitioned into myofibroblasts at the highly tensed growth front as the microtissue progressively closed the cleft, in analogy to closing a wound site. Proliferation was up-regulated at the growth front, and new highly stretched fibronectin fibers were deposited, as revealed by fibronectin fluorescence resonance energy transfer probes. As the tissue was growing, the ECM underneath matured into a collagen-rich tissue containing mostly fibroblasts instead of myofibroblasts, and the fibronectin fibers were under reduced tension. This correlated with a progressive rounding of cells from the growth front inward, with decreased a–smooth muscle actin expression, YAP nuclear translocation, and cell proliferation. Together, this suggests that the myofibroblast phenotype is stabilized at the growth front by tensile forces, even in the absence of endogenously supplemented TGF-b, and reverts into a quiescent fibroblast phenotype already 10 mm behind the growth front, thus giving rise to a myofibroblast-tofibroblast transition. This is the hallmark of reaching prohealing homeostasis. 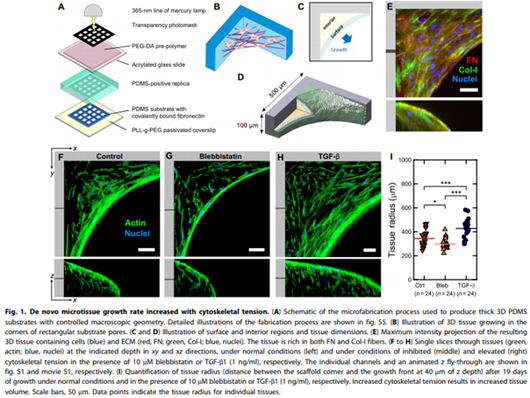