Linking organismal and genetic diversity of floral microbiomes to ecosystem properties and functional plant traits
Robert R. Junker, Alexander Keller
Bacterial communities associated to above-ground plant parts are crucial for plant health. The composition of bacterial communities associated with above-ground plant parts may be shaped by source communities such as soil bacteria but also by plant traits such as the availability of carbon and nitrogen or the composition of secondary metabolites. Although flowers are directly linked to plant fitness, bacterial colonizers of the anthosphere are less well characterized and their ecological roles are less well understood compared to bacteria associated with leaves. Additionally, the determinants of their diversity as well as their responses to environmental gradients such as variation in land use intensity are unknown. By exploiting the hierarchical organization of the biodiversity exploratories, we are planning to investigate the organismal and genetic α-, β- and γ- diversity of floral microbiomes as a function of land use, plant diversity, and functional flower traits such as floral scents and the availability of carbon and nitrogen in order to understand links between these different levels of biodiversity. These data and results will allow us to gauge the relative importance of environmental and plant-based factors. Thus, our results will provide a novel perspective on associations between bacteria and flowers and help to understand effects of anthropogenic alterations of the environment on organismal and genetic diversity.
The  DFG-funded project is part of the framework of the  Biodiversity Exploratories (DFG Priority Programme 1374)

Effects of flower bacteria on floral scent and pollination
Gerard Farré-Armengol, Robert R. Junker
The overall aim of this project is to improve our knowledge about the ecological functions of microorganisms related to plant-pollinator communication and pollination. Microorganisms such as bacteria and fungi grow on floral structures in considerable amounts and they have a great potential to affect some floral traits that play a relevant role in pollinator attraction. The specific objectives of this project are:
1) To measure the effects of bacterial microbiota on floral scents and on pollinator attraction to flowers.
2) To shed light on the processes and agents that affect the dispersal of bacteria among flowers.
funded by  FWF

Functional responses of plant communities and plant-pollinator interactions to altitudinal gradients and climate change
Robert R. Junker
The year 2014 was globally the warmest since records started and thus represents the (provisional) peak of the general trend of global warming that is expected to continue, which has severe negative effects on biodiversity and ecosystem processes. In order to understand the causes and predict or even mitigate consequences of these impacts, it is mandatory to study present patterns of biodiversity and to quantify ecological responses of communities to environmental changes such as increasing temperatures. Spatial gradients such as those along mountain slopes as well as re-visitations of sites where historical vegetation surveys had been conducted represent powerful long-term and large-scale study systems to estimate effects of climate change on ecosystems. The diversity, characteristics, distribution, and relative abundance of functional plant traits in communities reveal information on community assembly and ecosystem functioning. In contrast to vegetative and life-history traits, such information remains largely unknown for flower traits despite their essential roles for important ecological processes such as sexual reproduction of plants and pollinator diversity. In the proposed study, the advantages of the altitudinal gradient of the Austrian Alps as well as historical vegetation surveys will be exploited to fill that important gap. The plant species present in communities located between 1500 and 2600 m a.s.l. will be phenotyped by a large set of vegetative but most importantly floral functional traits including the morphology, phenology, scent emissions and color. Additionally, the phylogenetic composition of the communities as well as the flower-visitor interactions will be considered. This extensive and comprehensive dataset will allow testing hypotheses on community assembly, the link between functional plant diversity and flower visitor diversity, and the functional responses of plant communities and interaction patterns to altitude and climate change. The anticipated results and conclusions will therefore provide a novel perspective on community ecology and assembly with implications for climate change and the vulnerability of natural ecosystems and the conservation of the alpine flora and fauna.
funded by  FWF | Start: May 2016 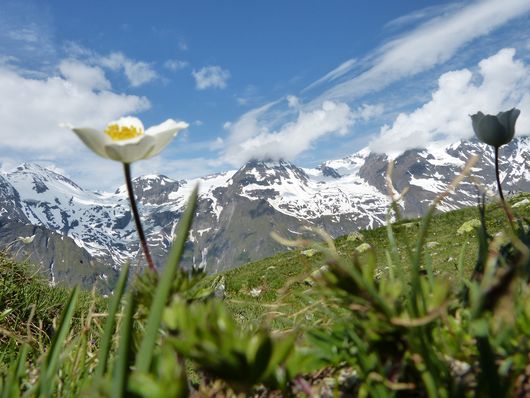 Mycobiont – photobiont – bacteria interactions in saxicolous crustose lichens as sensitive bio indicators in context of climate change
Ulrike Ruprecht, Ann-Marie Zein, Robert R. Junker
Climate change has severe negative impacts on species and their interactions. In order to understand the causes and consequences of environmental changes it is obligatory to investigate current patterns of biodiversity in heavily threatened areas such as the Alps. Mean annual temperature negatively correlates with altitude, which allows employing the altitudinal gradient as proxy for climate warming. Lichens are symbiotic organism, containing a mycobiont (fungus) and a photobiont (algae/ cyanobacterium) and exist in varying degrees of specialization to each other. Additionally, lichens are habitats for bacterial communities and result in very specific structured life communities, which are related to the climatic conditions in the different altitudinal areas. For understanding the effects of climate change in relation to the mycobiont-photobiont-bacteria interactions a biodiversity study along an elevation gradient of about 1900 m in high alpine areas (Großglockner, Salzburg, Austria) will be carried out with saxicolous crustose lichens as model system.
funded by the Land Salzburg | Start: July 2016

Multifunctionality of floral scents
Anne-Amélie C. Larue, Robert R. Junker
The presence of mutualistic and antagonistic flower-visitors suggests that the composition of floral scents is the result of conflicting selection pressures and represents a trade-off between them. This project aims to understand the complexity of floral scent bouquets and to generate a more sophisticated understanding of their multiple functions. It is planned to identify the behaviorally active compounds within complex bouquets that either attract mutualists and/or repel antagonists. Therefore, the behavior of different insects towards flowers with natural and biochemically or genetically manipulated floral scents will be compared to pinpoint the key-odorants and their effective doses for attraction and defense. Additionally, the adaptive value of floral scents as filters, i.e. their ability to select the most beneficial agent(s) while screening out antagonists, will be investigated.
DFG-project: Complexity and multifunctionality of flower scents and their potential as floral filters 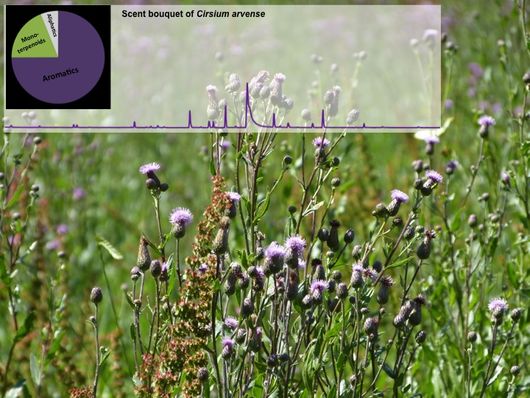 Herbivore induced changes in floral phenotypes
Mathias Hoffmeister, Robert R. Junker
This study targets the intraspecific variation of floral scents, colours and resources. Intraspecific variability in flower traits may occur as a short-term response to biotic interactions in individual plants. We are aiming to study how this variation in floral traits alters the behavior of mutualistic and antagonistic flower visitors. While the investigation of herbivore-induced changes in vegetative scents and their importance in direct and indirect plant defense has a long tradition, the research regarding similar effects on flowers is in its infancy. We will study local and systemic changes in floral scent, color, and nectar features after herbivory and flower damage and associated effects on the flower visitors’ behavior and plant reproduction.
DFG-project: Intraspecific variation of floral traits as adaptation to antagonists and mutualists

Evolution of flower and fruit traits
Jonas Kuppler, Robert R. Junker
Different parts of individual plants require contrasting services: vegetative plant-parts avoid interactions with herbivores, flowers and fruits advertise interactions with mutualists, while antagonists should be deterred from these valuable tissues. In this project, we will evaluate (a) the interaction frequency and thus network structure between plant-parts (leaves, flowers and fruits) and diverse organisms and (b) the phenotype of these organs. We will apply the concept of “phenotypic integration” to reveal whether the organ-specific adaptation to multiple interaction-partners is constrained by the metabolism of the other plant-parts or if evolution can act independently on leaves, flowers and fruits.
In another sub-project, we will examine the interactions between the Hawaiian tree Metrosideros polymorpha with its native and invasive flower visitors. We expect a geographic selection mosaic along environmental and elevational gradients where invasive ants and honeybees are heterogeneously distributed and may thus cause variation in flower traits on a larger geographic scale.
“E-Norm”-project (Graduiertenkolleg Evolutive Netzwerke: Organismen, Reaktionen, Moleküle der HHU Düsseldorf): Past diffuse co-evolution and recent interaction networks 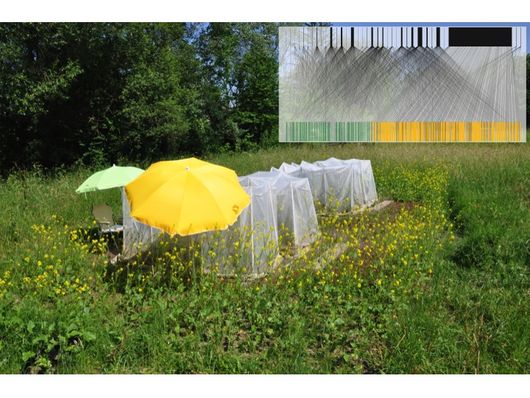 Bacteria as floral colonisers
Robert R. Junker
Bacteria and other microorganisms frequently colonise plant surfaces. The identity of bacterial colonisers and their effects on plants is well studied in interactions with roots and leaves, while their occurrence on flowers was rarely investigated. We are interested in the intra-floral distribution of bacteria and how bacteria affect the phenotypes of flowers. Potential effects on the behaviour of flower visitors and the reproduction of plants will be considered, too. 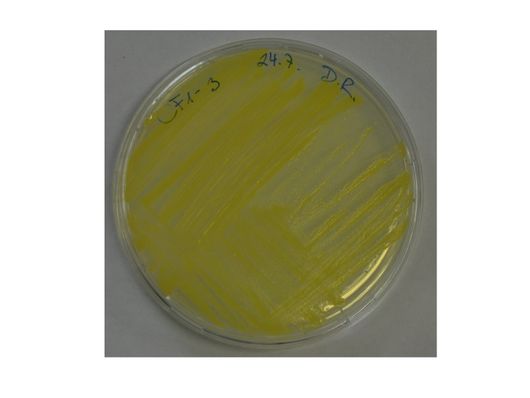 back to Junker group