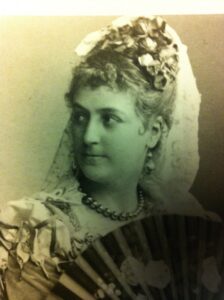 LILLI LEHMANN IN THE USA (1885-1902):
Star-Image and artistic mobility at the turn of the century.

Lilli Lehmann (1848-1929) is regarded as one of the most influential opera singers of her era. Her artistry, beloved by composers such as Richard Wagner, for whom she sang at the first Bayreuth Festival (1876) and her friend Gustav Mahler whose ‚Golden Decade‘ in Vienna, Lehmann graced as a regular star performer.  Through her international fame as an artist, she also built a reputation as a teacher, writer, director and key cultural figure in Europe and America.  Her influence extended far beyond her native Germany, in particular to Austria, where, dubbed as the ‘Cosima of Salzburg‘, she significantly contributed to the transformation of its cultural landscape not only through her part in the building of the Mozarteum conservatorium and purchase of Mozart‘s Birthplace, but also in her establishment of the Mozarteum Summer Academy, which she led in her final years. (Cole 2019, Vortrag in Salzburg). Lehmann however also became a highly influential figure in America, where from 1885-1902 she was a regular star guest at the opera and touring the states in numerous opera and concert performances.

Lehmann’s time in the USA was a key period in her artistic career, in which she finally launched herself into a new era of personal and artistic freedom. This dramatic transformation was spurred on by a tragic loss: in 1883, the lode star in Lilli Lehmann’s life, her mother Marie Loew, died. Suddenly 35 year old Lilli Lehmann, fuelled by grief, threw herself relentlessly into her work to finally sing the dramatic repertoire she was convinced she was destined to perform. (Cole 2021)Within three years she had abandoned her modestly paid position at the Hofoper Berlin, where she had had to perform an exhausting repertoire, of often less significant roles and finally she journeyed to New York, to accept a star guest position at the Metropolitan Opera in Anton Seidl’s German season. In 1888 she returned to America with her new fiancée Paul Kalisch, where they immediately married in New York. In the ensuing 15 years, at first accompanied by Paul, she undertook 9 long tours around America.

Each season she stayed in America, was usually a combination of a season of opera performances mainly in New York folllowed by several months of concert tours. These tours were initially set up and sponsored by William Steinway. The substantial fees Lehmann received for each concert, far exceeding her opera fees, gave her the courage to renounce her secure contract in Berlin. This resulted in an intitial ban on her performing in German speaking countries and committed her to regular tours in America. The concert tours were a gruelling undertaking, evident simply from a cursory glance at the itinerary. For example, just in her first concert tour, undertaken after completing her first season at the New York Metropolitan Opera, she gave a total of 66 performances between March 8th-June 24th 1886. Her own handwritten list of the tour details visits to: New York, Boston, Providence, Boston, Worcester, New Haven, New York, Orange, New York, Brooklyn, Washington, Richmond, Philadelphia, Toronto, Buffalo, Syracuse, Rochester, Chicago, Milwaukee, Albany, Brooklyn again, New York, St Paul, Minneapolis, Toledo, Louisville, St Louis, a return to Milwaukee, Evenstone, Toronto once again, Cleveland, Cincinatti, Boston once more, Indianapolis, and finally once again Toronto, Buffalo und Milwaukee for several last concerts of opera and oratorio. These concerts were the main source of income for Lehmann at this time, raising more money than she received for her opera performances at the Met, and thus creating her fortune.  In them she performed a mixture of programmes with exerpts from operas, oratorios and a few Lieder. Notably besides bravoura-arias, she sometimes performed new Lieder by various young German composers who she thus supported and brought to a wider audience.

Paula Breisky characterised Lehmann as a missionary for European culture in America and emphasised her influence on the cultural landscape of the USA. (Breisky 1948)This was achieved not only by her dissemination of European culture through her tours but also via her teaching of young American singers. Her growing recognition in the USA continued to affect and accelerate her career as a singing teacher in Germany. She was aware of her position as role model for many young American women, who recognised professional singing as a medium for social advancement. Lehmann later strategically targeted this market of potential students advertising herself in America as a teacher, and encouraging young singers to venture across the Atlantic to study with her. For years they did so, even coming from Japan to study with Lehmann in Salzburg and Berlin and creating a whole generation of singers who were trained in her vocal method and who were deeply influenced by her performance ideals.

So much however about this period in performance history and also in Lehmann’s biography is still as yet unknown. What was it really like to undertake a tour like this around the America of the 1880s-90s? How did the singers really perform? What was day to day life like for a young female singer on these journeys? Whom did she meet and what did she think about them; the landscape of the New World; her own performances and her own artistry? How much was she controlling the way she was presented to the public and creating her own performing persona? To what extent was she managing her career and her money herself and manipulating her image using available new media?

Some of her personal accounts of these journeys still exist and have not yet been deciphered (from her rather idiosyncratic kurrentschrift). This project aims, through close study of these previously unpublished, handwritten documents, as well as contemporary accounts, correspondence and printed sources, to reveal some of Lehmann’s personal experience of these stage and concert tours and expose details of theatre work at this time in the USA, such as directing strategies and production routines. These private writings in particular also offer the unique opportunity to ‚hear‘ Lehmann‘s personal voice and permit us to eavesdrop on her private opinion of her own performances  and to gain an insight into her developing artistic vision at this time.