This project is in collaboration with the CGRE Group of RWTH Aachen University ( www.cgre.rwth-aachen.de). It is part of the DFG funded Priority Program “Mountain Building Processes in 4-D” (http://www.spp-mountainbuilding.de/) Thermokinematic models are key for understanding the influence of subduction polarity reversal on the evolution of the Alps, as they provide constraints on the spatial distribution and timing of exhumation. However, state-of-the-art models cannot account for uncertainty of structures at depth, which makes it impossible to determine the driving force behind detected exhumation signals. In this project, we build routines that allow for accounting for full geometric uncertainty in thermokinematic models. We first apply these routines to the northern foreland fold-thrust-belt of the Alps, the Subalpine Molasse. This area is particularly suited to resolve large-scale dynamics of the orogen, as it links the Alps with its foreland, and prograding or backstepping of the orogenic front is directly linked to orogenic processes; while continuous plate convergence will result in progressive incorporation of foreland sediments in the orogenic wedge, changes in the tectonic regime would be directly witnessed in the sequence of tectonic activity as well as the geometry of the Subalpine Molasse. At the same time, the Molasse consists of foreland basin sediments, which directly record the hinterland history. Our thermokinematic models will show how unique thermochronological signals are when the uncertainty of geometry at depth is taken into account. In a following step, we apply our routines at the orogen scale in the Eastern Alps, in the region where a subduction polarity reversal has been conjectured. We will test whether standard thermokinematic models are indeed able to distinguish between different drivers behind exhumation signals. We will identify key regions where data for precise and accurate models are required, and will study these to provide a quantitative estimate how much deep seated processes related to slab dynamics imprint exhumation estimates in the Eastern Alps. 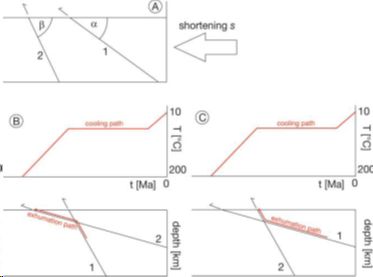 The influence of kinematic uncertainty on cooling paths. A: uncertainty of dip of a single fault. Fault dips either at α or β degrees. Applying the same amount of shortening s results in different exhumation of eα = s*tanα and eβ = s*tanβ. B & C: two different faults crosscut each other and are active at different stages during orogeny. Exhumation paths are significantly different for scenarios B & C, whereas resulting cooling paths (plotted above) may be indistinguishable. In natural systems, additional complexity is added through potentially complicated 3D morphology of the faults, diffusive heat transport, movement direction of fault (e.g. reactivation as normal fault), or different sliding velocities during tectonic events.

Two interpretations of a cross section across the Subalpine Molasse based on the same high resolution seismic data set (von Hagke and Malz, 2018): A: At the deformation front, a triangle zone is interpreted. Triangle tips are connected by a secondary detachment (Schuller et al., 2015), suggesting in-sequence formation of the triangle zone. B: A similar triangle structure is shown at the deformation front but triangle tips are not connected by the same backthrust (Ortner et al., 2015). The wedge in the hinterland offsets the backthrust of the foreland wedge, thus suggesting an out-of-sequence formation of the triangle zone. Similarly, in more internal units the interpretations show either a sequence of two open folds separated by a tight anticline (A), or alternatively include an additional thrust (B). These different interpretations have immediate consequences for our understanding of the tectonic history of the Alps. (C) 3D Model of the European slab, as determined from geophysical data (Kästle et al., 2018). The termination of the Subalpine Molasse coincides with the boundary of the downgoing European Plate, suggesting a potential link (Mock et al., 2021).
Overview