THE UNKNOWN ARMENIAN PRISONERS OF WAR IN HABSBURG AUSTRIA, 1915-1917 THE ANTHROPOLOGICAL STUDIES OF RUDOLF PÖCH 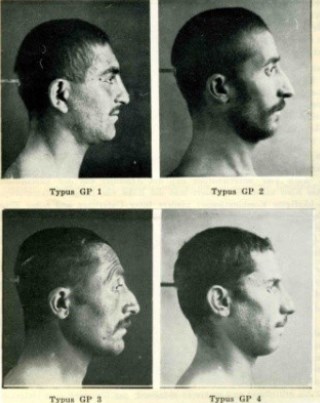 I. PROJECT DESCRIPTION AND AIM

“BURNING WITHOUT FIRE“… are the words that Artašes Kamalyanc’ used to express his situation as an Armenian prisoner-of-war in the Austro-Hungarian camp of Reichenberg/Liberec in 1915. His poem was recorded by a study commission led by the Austrian anthropologist Rudolf Pöch (1870–1921) as part of a large-scale racial survey across ten different POW camps of the Austro-Hungarian monarchy: Reichenberg (today Liberec, Czech Republic) in 1915, Theresienstadt (today Terezin, Czech Republic) in 1915, Bruck-Királyhida (today Bruckneudorf, Burgenland; Austria) in 1916 and 1917, Eger (today Cheb, Czech Republic) in 1916, Grödig (Salzburg, Austria) in 1916, Wieselburg (Lower Austria, Austria ) in 1916, Hart (Amstetten, Austria) in 1917 and Spratzern (Lower Austria, Austria) in 1917.
During these campaigns, around 5,000 men were anthropometrically assessed, photographed, plaster casted and additionally documented with phonogram and film samples. Among them there were 187 Armenians. While the anthropologists in charge hailed the unique situation the war would offer to science, namely the concentration of „anthropologically less known“ peoples from a panoply of geographical sites on their own territory, the prisoners-of-war were investigated there under the restrictive conditions of the camp and subjected to disgraceful propaganda wars.
The Department of Anthropology of the University of Vienna still holds the majority of these precarious „anthropological“ documentations today, other parts of the documentations are kept in the Museum of Natural History. While they have been consulted for historical studies during the last decade, no attempt was ever made to personalize or repatriate these media. Beyond Foucault-inspired readings that invoke surveillance, gaze and objectification, these documents can be seen to exhibit a performative quality that exceeds their original contexts of construction, and the peoples who were once the focus of study can engage with them as part of their own history.
The aim of the project – bringing archival numbers to life
The aim of the project is to research the identity and life history of all of 191 Armenian prisoners-of-war that were part of the Viennese racial survey in collaboration with their Armenian communities or descendants, and to bring back their faces and voices to their place of origin, also by way of an exhibition in Austria and Armenia to a broader public. Apart from being a first time pilot study for ethically dealing with the larger anthropological POW archive, the project intends to explore a forgotten aspect of the Armenian history around 1915 – a year in the shadow of the tragedy of the Armenian Genocide.
The focus of the research project is to apply the „historical issues“ (World War I, Armenian history of 1915; prisoners of war) on a biographical level. This means, every single anthropological number of Pöch’s anthropologically investigated ethnic group of “Armenians“ is regarded as interface between past and present, between Austria and Armenia. This may lead to a better historical understanding based on the POW’s life history resulting from archival material as well as – above all – from narratives of his family and descendants.

III. THE CURRENT STATE OF THE PROJECT

1. ARCHIVAL WORK
The work on the archives of R. Pöch has been finished in Austria, resulting from it there are detailed lists about the whole documentation available, containing the following information about 189 anthropologically measured and two more only recorded Armenian POWs: Name and Family name. Age. Place of Birth. Place of Residence. Travelling. Profession. Birthplace of Father. Birthplace of mother. Religion. Languages spoken. Writing and reading competences. Diseases, war injuries. Anthropological measurements. in some cases also information about village, about farming (land size, number and kind of animals kept). Lists of photographs, stereo-photographs, negatives and plaster casts. There are four plaster heads, one plaster hand, one plaster foot and one plaster ear. In addition, there are six phonogram recordings.
In Armenia, archival research has also been started after having received the first full information about some POWs. The archival research is focused on 60 POWs from birthplaces in today’s Republic of Armenia.
2. FIRST FIELD WORK CAMPAIGN IN ARMENIA (MAY 10TH-23RD, 2016) (J.DUM-TRAGUT AND ARMENIAN TEAM)
In the course of the first fieldwork campaign the native places of POWs (having been citizens of historical Erivan governorate) were visited the Armenian provinces Vayoc’ Jor, Širak and Aragacotn.In those villages where a certain POW’s family could have been found by means of archival material or of the search conducted by the villages’ mayors, these families or certain individuals, were directly met in their homes. All encounters with families were recorded as researcher-driven interviews, semi-structured interviews as well as peer talk. The main questions referred to the general knowledge about the POW, his biography and thus family history, others to his return to Armenian (in what way, when), or to possible stories the POW had told his relatives about his time in Habsburg Austria. If possible, family trees were asked, their accuracy, however, must be confirmed by controlling the existing data in the Armenian State Archives.
In Vayoc’ Jor, the following villages were visited: Areni (two POWs), Gndevaz (two POWs), Getap’ (one POW), Rind (one POW), Barjruni (one POW) and Glajor (one POW), as well as first research in the villages of Zaritap and Nor Aznaberd (refugees from Aznabyurt/Nakhichevan), as well as the cities of Ełegnajor (meeting with Province’s governor) and Vayk’. In Aragacotn the villages of Łazaravan (one POW), Uĵan (possible one POW) and Garnahovit (one POW) were visited, first contacts to Lusagyuł (one POW) were established.In Širak, the villages of Gusanagyuł, Saratak, Nor Kyank’, (all one POW) were visited. The contact with the mayors of the other villages was set up.
3. THE WORK HAS TO BE CONTINUED IN 2016 AND 2017
With further archival research, mainly conducted by the Armenian team in Armenia and with fieldwork.

Work in principle the same as in campaign one, but this time Pöch’s archival material (photographs, documents, etc.) will be returned to the POWs’ families in Vayoc Jor (10) and Yerevan, other families and villages in Širak (9), Tavuš (11), Lori and Syunik’ (12) will be visited. The archival material will be given to the families by J. Dum-Tragut and K. Matiasek. K. Matiasek will also film and take photos in the village to gather material for the planned exhibition and book.

The third and finishing field work campaign is planned in spring 2017, mainly for returning archival material to families and to visit the remaining villages in Gełarkunik’ (4), Aragacotn (3)and Kotayk (2).