I studied Biology and Chemistry at the Maximilians University in Munich/Germany. 1973 I started a PhD at the Max-Planck-Institute of Psychiatry/Munich with H.D. Lux on the Stomatogastric nervous system of Crustacea, which is a mini-motor system containing 30 nerv cells driving the striated muscles of the stomach. The wiring of all neurons and their electrical properties are well known by now which lead to the understanding of its electrical output.
After I finished my PhD at the Max-Planck-Institute of Psychiatry and the Maximilians University in Munich I was invited as post doc to the USA. The research group around Toni Gorman at the Boston University Medical School had a main research topic on the mechanism of spontaneously generated electrical activity of Aplsia neurons. We used electrophysiological techniques, such as intracellular recording, voltage-clamp, ionophoresis and intracellular Ca2-measurement to establish a model of neuronal oscillations. In particular the contribution of a Ca2+-activated K+-current (IKCa) and intracellular Ca2+-alterations were studied. This work was followed up at the University of Konstanz (1997-1986).
Receiving a Heisenberg Award (from the DFG) (1984-1986) I visited the lab of Roger Eckert at the University of California, Los Angeles (UCLA) (1985), investigating the action of a specific blocker of IKCa (Charybdotoxin).
1986 I received an appointment for a position as full Professor at the University of Salzburg (Austria) where I established the laboratory of Cell-Physiology, set up teaching and research and equipped Electrophysiology labs (supported by the University and the FWF, Austria). As main scientific foci we studied single Ca2+-activated K+-channels (BK) from cultivated rat pituitory tumor cells (GH3) using patch clamp techniques. This technique allows to observe and survey single ion channel proteins at work. The channels play an important role in electrical excitation processes, such as in the generation of action potentials, synaptic transmission, are involved in vaso-regulation, in the modulation of hormone excretion, in auditory tuning of the hair cells, in erectile processes etc. BK channels are involved in channelopathies (diseases caused by natural genetic modulation of the channels), such epilepsy, stroke, paroxysmal movements, migraine, erectile dysfunctions, cerebellar ataxia, hearing loss, autism, asthma, mental deficiency, myotonia, heart diseases, hypertension, bladder or gastric hypermotility, etc. Our research topics using BK channels involved: mechanism of action of alcohol (ethanol) as well as acetaldehyde and acetic acid (metabolites of alcohol), all which contribute to the effects of ethanol. Furthermore, we studied the effects of polyamines and the action of gasotransmitters (nitric oxide (NO), hydrogen sulfide (H2S) and oxidative stress on BK channels. In cooperation with colleagues from Russia and Libya we are still busy investigating homocysteine (a precursor of H2S), plant extracts and drug design in the context and treatment of diseases. 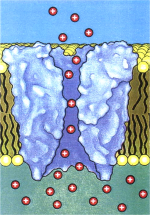