Animal structure and development
Several lines of research are pursued by our team.

In this scientific area, we are interested in the pathogen-host interaction. The research is increasingly focused on neutrophil extracellular traps (NETs) since these webs of extruded DNA were identified as important elements of innate immune response. Being decorated with cytotoxic proteins, NETs act in a fragile balance between antimicrobial defence and fatal host tissue damage, with most important implications for the pathogenesis of chronic inflammatory disease and acute organ failure. The main pathway of NET generation (NETosis) by neutrophils is a special form of cell death mediated by molecular signals, for example by the chemokine CXCL8/IL-8. It involves the generation of reactive oxygen species (ROS) and histone protein citrullination. A second type of NETosis has been shown to leave neutrophils viable and phagocytotic active.

Our research group has over the years gained a high degree of expertise in analysing the microstructure and pathogenic potential of NETs. Combining electron microscopy (TEM, SEM) with immunolabelling, in situ hybridisation and other advanced histology techniques, we have made significant contributions to clarify the maturation of NET-forming ability in neonates and to test CXC receptor antagonists as a possible means of therapeutic intervention. Impressive evidence has been collected that NETs decisively contribute to chronic inflammation in the periodontium and especially in the airways during cystic fibrosis and chronic obstructive pulmonary disease (COPD), and that NETosis involves chromatin decondensation to beads-on-a-string fibres.

The work has entailed fruitful collaborations with internationally renowned research groups (presently at PMU Salzburg, Saarland University, University of Tübingen). The potential benefit of this research is expanding. Entangled with respiratory burst and autoantibody induction, NETs are turning out be almost omnipresent in inflammatory response, playing important roles in rheumatoid arthritis just as for the osseointegration of titanium implants.

Over the last two decades, teleost fish have gained a high profile as suitable model organisms for developmental biology, especially for study of the spatial patterns and causal mechanisms of vertebrate organ formation and cell differentiation. This research has many important implications, extending from the formation of complex structures and functions through individual ontogeny and over evolutionary time to aspects of human disease. Our specific interest is focused on the development and growth of skeletal muscle and its plasticity in response to external factors and interspecific variation. We have identified the fish dermomyotome, a transient structure of the somite that provides most of the muscle precursor cells in the embryo, and have shown how such cells enter the myotome. Recent work demonstrates that the proliferation-differentiation balance of these stem cells is dependent upon environmental factors, with important downstream effects on fish growth in later life. A particular focus has been put on the formation of hypaxial and fin muscles, the fish homologues of terrestrial vertebrate limb, tongue, laryngeal and diaphragma muscles.

Estimation of the time since death is a crucial aspect in forensic science. This is necessary to gain crucial information about the circumstances of death and is, in criminal cases, essential for the confirmation or invalidation of alibis and ultimately for the solution of a crime. Several methods are used to delimitate the post mortem interval (PMI) in every day forensic work, such as the temperature method which is based on the decrease of the body core temperature from 37°C. However, this method is only useful in the early postmortem phase (until up to two days postmortem). Forensic entomology which analyses the presence of cadaver feeding insects and their developmental stages requires accessibility of the body to such insects and was shown to deliver valuable information only for minimal PMI values. Thus, additional methods to delimitate the time since death are required that produce reliable information in a minimum of time and can easily be implemented in any forensic laboratory. Our previous results demonstrate that muscle proteins degrade in a predictable fashion after death. Analyses of the presence and absence of these proteins and their split products using molecular biological methods (Western blotting, zymography) allows to draw relatively precise conclusions about the time of death. Our current work is aimed to identify a large number of muscle proteins in humans and pigs which can be used for delimitation of the time since death. In addition, the influence of internal and external factors (such as temperature, age, gender, body mass index, etc.) on post mortem degradation behaviour of these proteins will be evaluated. The results of this work are aimed to build the foundation for establishment of this method in forensic laboratories. The collected data will be used to establish a database which can be used by forensic examiners from all over the world to delimitate the time since death. 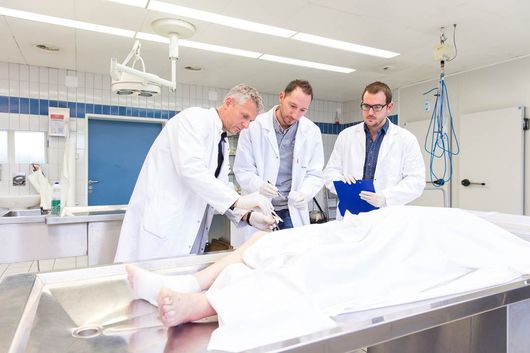 Our team maintains a broad interest in zoology, working in freshwater, marine, and terrestrial habitats in tropical and temperate environments.
Currently, the primary focus is on tropical freshwater lakes in Madagascar and on South Pacific islands using these isolated water bodies as model ecosystems for the study of biodiversity, global change, deforestation and the effects of introduced alien predators. In collaboration with many taxonomists, we assess species diversity from algae to fish and relate it to environmental conditions.
Out of these projects we initiated research on freshwater eels (Genus Anguilla) in Oceania. We use pop-up satellite transmitters to follow their long distance marine migrations to the spawning areas. Together with oceanographers and geneticists we try to understand oceanographic conditions and population structure.
In close collaboration with the Austrian Federal Agency of Water Management we are working on various aspects of limnology and fisheries in Austrian alpine lakes. Recent projects have been centered on trophic interactions in lake food webs and on the control of introduced predators and their parasites.
We are also studying population biology and ecology of amphibians in alpine environments. We have covered a broad range of topics from feeding ecology, sex determination to the use of telemetry for delineation of terrestrial reserves.

The research interests of this team are multidisciplinary, covering a spectrum of the biophysical and now also the social sciences, at local to pan-European scales. However, a general interest in classical zoology and insect biology has been maintained, primarily involving flower-visiting Diptera and Hymenoptera, but also covering other insect groups. Particularly, present research includes taxonomy and functional biodiversity of syrphid flies along altitudinal gradients and under different land uses in the Austrian Alps, and occurrence of potential pollinating insects (wild bees, syrphid flies) in a garden landscape in Salzburg. Activities in biodiversity and conservation research expand upon this to cover more general principles, such as the development and implementation of a European Strategy for the Conservation of Invertebrates for the Council of Europe under the Bern Convention, integrating policy and management in Protected Areas and biodiversity protection in relation to the provision of Ecosystem Services (everything that nature provides that is of benefit to humans) and integration into sectoral policy.
Further active research focuses on the provision of Ecosystem Services under dynamic conditions of environmental change, including climate change, and understanding the consequences of possible extreme climate change (greater than the present 2°C warming target) for decision-making across Europe. These are contributions to international EU research projects: The FP7 BESAFE project focuses on improving our understanding of alternative ways in which the “value of biodiversity” can be used to improve policy-making and governance at local to European and global scales (www.BESAFE-project.net). The FP7 Project IMPRESSIONS (www.impressions-project.eu) has the general aim to advance understanding of the consequences of high-end climate and socio-economic scenarios and to evaluate how such knowledge can be embedded within effective and integrated adaptation and mitigation decision-making processes. These projects have also ensured close co-operation with a large number of high level research institutions across Europe and globally.