The beautiful old city of Salzburg, with its fairy castle, its fast-flowing river, and its ancient streets and pathways, with images of its most famous son, Wolfgang Amadeus Mozart on many corners, was the site of this year’s ISDCL conference, arranged and presided over by Professor Renate Egger-Wenzel, on 18 and 19 July, 2022. Some 25 members were delighted to see each other again at the University of Salzburg’s 400-year-old Faculty of Catholic Theology after a Corona-induced break of three years. The meeting, postponed from 2021, was attached to the SBL International conference attended by a few hundred scholars so that ISDCL members could attend some sessions of the larger organization that interested them. The ISDCL conference was on the topic of “What Makes a People?” and twenty members, not only from Austria, Germany, Netherlands, Italy, and Hungary but also from as far afield as Brazil, Israel, United Kingdom, Ireland, Finland, South Africa and the United States, offered their thoughts on what proved to be a fascinating and wide-ranging subject. Lecturers dealt with Greek and Hebrew authors and terminology, with biblical and apocryphal (deutero-canonical) literature, with social values and conflicts, as well as with intriguing aspects of theology and idolatry. Most importantly, a number of young scholars attended for the first time and some also presented papers. Discussions, both formal and informal, were instructive and stimulating, and the meeting closed with a festive dinner, hosted by the ISDCL, its President, Professor Egger-Wenzel, and the publishers of the ISDCL series, Walter de Gruyter, who also mounted a splendid exhibition of their books. At the dinner a Festschrift for Professor Núria Calduch-Benages, edited by Francis Macatangay and Francisco-Javier Ruiz-Ortiz, entitled Ben Sira in Conversation with Traditions, and containing articles by twenty-three scholars, was presented to the honorand and she responded in a moving and gracious manner. Members also congratulated Professor Egger-Wenzel not only on arranging such a delightful meeting but also on the appearance of her Polyglot Edition of the Book of Ben Sira, just published by Peeters in Leuven and exhibited for the first time at the conference. The running of the Society was, as always, democratically discussed at the business meeting and it was agreed to hold the next meeting in Helsinki, hosted by our member Marko Marttila in 2024 and the 2026 meeting in Syracuse, hosted by Dionisio Candido. 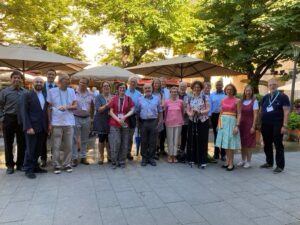 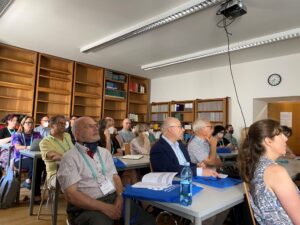 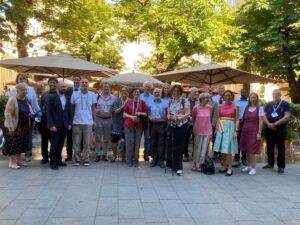