Environmental radioactivity
Radioactive contamination with man-made radionuclides is a consequence of the use of atomic energy after the groundbreaking discoveries of the structure of atoms and the possibilities for military and commercial use in the first half of the 20th century. The nuclear testing after WW II during the Cold War era conducted by the then atomic powers USA, GB and the former USSR, led to significant global contamination with nuclear fallout. The high explosion energies, in extreme up to 58 MT TNT, caused the rising of the explosion clouds up the stratospheric air masses and transport systems to distribute the nuclear inventory globally. The nuclear inventory of this time, distributed on the northern and the southern hemisphere, thus appears under the name of “Global Fallout”.
It was more or less a decision based on reasoning, that finally the nuclear powers at that time, the USA, the former USSR and GB, signed the Partial Test Ban Treaty (PTBT) in 1963. This treaty banned nuclear weapon tests in the atmosphere, in outer space and under water, which prohibited all test detonations of nuclear weapons except for those conducted underground.
In addition to nuclear weapons fallout, uncontrolled releases of radionuclides in reactor accidents contaminated the environment on a different spatial scale and intensity. The most severe, completely uncontrollable event worldwide was the reactor accident in the Ukrainian NPP Chernobyl in April 1986. Approximately 3500 km² of populated area around the reactor had to be evacuated and it will remain unsuitable for agriculture and unpopulated for centuries.
Airborne radionuclides from the Global and the Chernobyl Fallout tend to be enriched and accumulated on glacier surfaces, as there is no diluting matrix present like soil or vegetation. Thus, in these aeolic sediments on glaciers, the cryoconites, the highest radionuclide concentrations in the environment can be detected. By the use of radioisotopic ratios of Cesium and Plutonium isotopes, the source of the fallout can be identified. 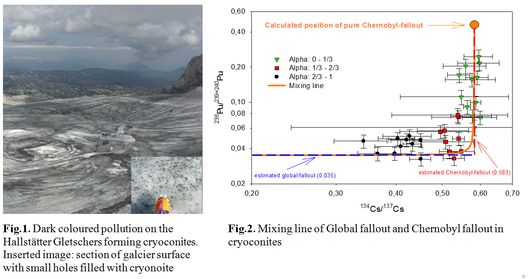 Aerosol physics and radon research
Since the inhalation of cigarette aerosols and of radon progeny are commonly considered as the two primary causes of lung cancer occurrence in humans, the current research projects can be grouped into two major areas: (i) radon lung dosimetry, i.e. research associated with the inhalation of radon and short-lived radon progeny in human and animal lungs, and resulting radiation doses in bronchial target cells; and, (ii) deposition of inhaled cigarette aerosols, i.e. research addressing the dynamic physical and chemical changes of inhaled cigarette aerosols and the resulting localized deposition of particle and vapor phase constituents in different regions of the human respiratory tract.
Energy deposition by radon progeny alpha particles in individual bronchial cell nuclei is the initial radiobiological effect for the induction of bronchial carcinomas. The radon lung dosimetry model for the inhalation of short-lived radon progeny comprises a sequence of four interrelated sub-models: the asymmetric, stochastic airway generation model of the human lung represents the inherent asymmetry and variability of the human airway system in terms of distributions of airway parameters and their statistical correlations. The stochastic particle deposition model IDEAL (Inhalation, Deposition and Exhalation of Aerosols in the Lungs) simulates the random walk of inhaled radon progeny through the stochastic airway structure, applying Monte Carlo methods. In the stochastic bronchial clearance model, mucus clearance velocities in individual airways are related to the respective diameters; and, in the stochastic cellular dosimetry model, the depths of sensitive target cell nuclei in bronchial airways are correlated with their diameters and target cell doses are weighted by their relative frequencies in bronchial epithelium. As a result of the stochastic nature of the human lung, target cell nuclei receive a wide range of radiation doses which can be approximated by lognormal distributions (Figure 3).
For the deposition of inhaled cigarette aerosols in the human respiratory tract, the IDEAL Monte Carlo code for constant particle diameters was extended by the ADiC (Aerosol Dynamics in Containment) model, which describes heat and vapour transport and dynamic changes of inhaled aerosols in the human respiratory tract. In contrast to stable aerosols, cigarette aerosol deposition is characterized by a continuous modification of diameter, concentration and composition due to coagulation, condensation, evaporation, and chemical reactions; smoker-specific inhalation conditions, consisting of puffing, mouth-hold and bolus inhalation as compared to normal breathing; and, particle transport and deposition are accompanied by the production of volatile compounds. The combined ADiC/IDEAL model, has been applied to the inhalation of combustible, electronic and heat-not-burn cigarette aerosols to predict particle and vapour phase deposition patterns in the lungs for a variety of exposure conditions. For example, most of the inhaled nicotine mass of e-cigarette droplets is deposited during the inhalation phase and almost all nicotine is deposited in vapour form, with only a very small fraction in liquid form (Figure 4).

Biophotonics
Ultraweak-Photon Emission (UPE) is a universal and intrinsic phenomenon, which despite its low intensity is an essential principle of biological evolution.  These not only include bursts of light during ferlitization and in the moment of death but also during normal homeostasis, particularly under conditions of di-/eu-stress, cell growth, and during chronicly shifted metabolic set-points such as in cancer cells.  Some of the most urgent questions of therapeutic efficiency, challenges related to nutrition, eco-toxocologic issues and the nature of disease in general suddenly attain a simple and straight-forward approach.
This line of reaearch encompasses various fields within biophysics, and as such range from the broad discipline of bio-electromagnetism to include also the role of water in living matter.  Alltogether, these three fields find their common denominator in the framework of Quantum Field Theory. 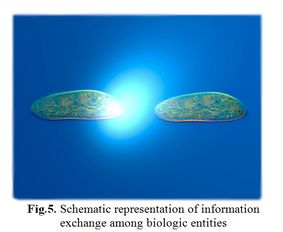 The theoretical aspects addressed so far include fundamental issues like i) principles of bio-communication based on purely biophysical (non-chemical) mechanisms; ii) photochemical reaction cascade involving ROSpecies embedded within the framework of quantum mechanics; and iii) coherent structures in living matter as the underlying matrix for highly efficient and almost error-free interaction of co-oscillating bio-molecular agents based on quantum electrodynamics.
Signal detection is achieved via a highly sensitive detector system (“Coherence Monitor”, CM) and incorporates the following features:
– compact design rendering the system quite mobile – even outside the laboratory;
– separate modes of operation (spontaneous emission vs induced luminescence mode);
– measurement window covering full range UV-VIS-nIR (170-850 nm) or narrow-range via by bandpass filters (grouped in five selectable bandwitdhs).
The approach decribed above is used for:
– monitoring cell- / organismic vitality in spontaneous or induced emission mode
– differentiating between optimal and pathogenic metabolic states (determination of the lowest reversible stressor-induced threshold);
– recording of “real-time” response patterns on physico-chemical stress exposure;
– inditifying oscillatory pattern during ontogenesis, morphogenesis and metabolism
– simulating wavelength-specific cell-compartments and monitoring their corresponging emission spectra;
– identifying biocompatibility of pharmaceutic drugs, as a tool in ecotoxicology, forensic sciences; amd as a bioindicator in general;
– analysing food quality standards; 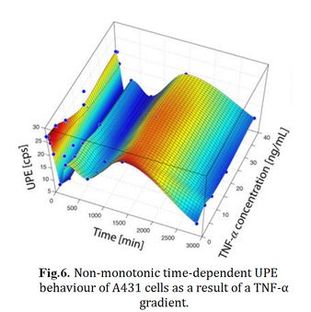 Photodynamic Decontamination of foodstuff
Access to safe and healthy food represents a fundamental human need, but still outbreaks of foodborne disease putting people’s lives at risk are regularly reported worldwide. At the Laboratory of Photodynamic Inactivation PDI-PLUS we develop Photodynamic Decontamination (PDc) as novel tool for improvement of microbiological food safety. We examined the bactericidal effect of PDc using a water soluble formulation of curcumin (polyvinylpyrrolidone-curcumin, PVP-C) or a curcumin derivative (SACUR) against Gram+ Staphylococcus aureus and Gram- Escherichia coli. Bacteria were inoculated on the surface of food with flat, spherical or complex geometry and PDc was performed using a tailored LED array as light source (435 nm, 33.8 J cm-2). Cytotoxicity was measured via CFU-counting. PDc based on 50 µM PVP-curcumin is effective against S. aureus on cucumber (3 log10 steps inactivation), pepper (3 log10) and porcine skin (1.7 log10), but fails to kill E. coli. The cationic SACUR is able to decontaminate flat pieces of porcine skin (50 µM, 4 log10), salad (75 µM, 6l og10) and tomato (50 µM, 6log10) from E. coli. Even round objects (fenugreek seeds: 5 log10 at 50 µM SACUR, mung beans: 3 log10 at 100 µM) were successfully decontaminated if the samples were rotated by shaking during illumination. As a conclusion, Photodynamic Decontamination based on natural photosensitizers is effective in improving the microbiological safety of food. PVP-curcumin features high biocompatibility, as both components are approved as food additives (E100, E1201), but for killing of Gram(-) E. coli the cationic derivatives are required. 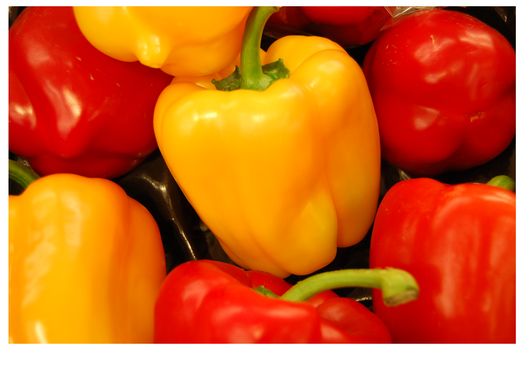