HomeChemistry and Physics of MaterialsPhysicsMorphoPhysicsPublicationsHow Linear Tension Converts to Curvature

Abstract
This study investigated how substrate geometry influences in-vitro tissue formation at length scales much larger than a single cell. Two-millimetre thick hydroxyapatite plates containing circular pores and semi-circular channels of 0.5 mm radius, mimicking osteons and hemi-osteons respectively, were incubated with MC3T3-E1 cells for 4 weeks. The amount and shape of the tissue formed in the pores, as measured using phase contrast microscopy, depended on the substrate geometry. It was further demonstrated, using a simple geometric model, that the observed curvature-controlled growth can be derived from the assembly of tensile elements on a curved substrate. These tensile elements are cells anchored on distant points of the curved surface, thus creating an actin ‘‘chord’’ by generating tension between the adhesion sites. Such a chord model was used to link the shape of the substrate to cell organisation and tissue patterning. In a pore with a circular cross-section, tissue growth increases the average curvature of the surface, whereas a semi-circular channel tends to be flattened out. Thereby, a single mechanism could describe new tissue growth in both cortical and trabecular bone after resorption due to remodelling. These similarities between in-vitro and in-vivo patterns suggest geometry as an important signal for bone remodelling. 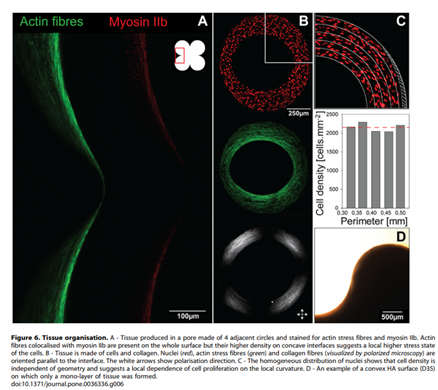