HomeDepartment of Environment & BiodiversityRESEARCHResearch fields of BotanyDötterlProjectsCypripedium
Frequency dependent selection in the deceptive orchid Cypripedium calceolus L. Populations of deceptive plants are considered to be more variable than populations of rewarding species in traits associated with pollinator attraction. This variability in traits increases the difficulty for pollinators to recognize and avoid deceptive plants. Hence, rare phenotypes are thought to have a higher fitness. The evolutionary process by which the fitness of a phenotype depends on its frequency relative to other phenotypes in a given population, is called frequency dependent selection. In rewarding plants, positive frequency dependent selection is expected, in deceptive plants, negative frequency dependent selection. Floral scent is a key mediator in plant–pollinator interactions. It is known to vary not only among plant species, but also within species among and within populations. It is still unknown, whether such variability is the result of divergent selective pressures, exerted by pollinators or of other scenarios. A prominent deceptive plant is Cypripedium calceolus L., the only lady’s-slipper orchid species in Europe. Its successful pollination depends on bees trapped in the labellum and escaping the slippery cavern via an exit of similar height as the insect itself, thereby passing the stigma and the anthers to first depositing and second collecting pollen. 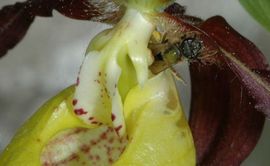 Bee leaving the posterior exit of a Cypripedium calceolus flower with pollen smear on its back.It squeezes through the narrow posterior exit and gets a load of pollen attached.(Photo: Stefan Dötterl) 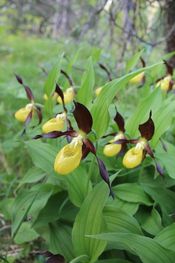