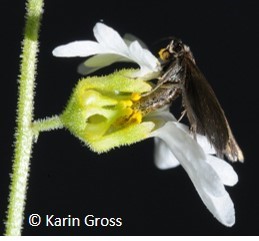 A female of the specialist pollinator Greya politella oviposits into a flower of Lithophragma bolanderi while efficiently pollinating it (Photo: Karin Gross) The diversity of life on earth is made up by webs of interacting species. Local differences in interacting species may cause different populations to coevolve along different evolutionary trajectories, resulting in a geographic mosaic of coevolution among pairs and groups of species. A major challenge in evolutionary biology is to elucidate what causes and maintains trait and species diversity. At the most general level, this can be explained by processes that generate diversity (random mutations, recombination) and by processes that selectively filter this diversity (natural selection, drift) in different ways in different populations. The most dramatic mutation is a whole-genome duplication (polyploidisation). It immediately induces strong reproductive isolation via hybrid sterility and can directly evoke phenotypic changes subsequently subjected to natural selection. Thus, polyploidisation greatly influences diversification and speciation. Flowering plants and their interaction with often complex networks of pollinators are ideal to study the mechanisms that cause and maintain diversity: (i) flowering plants are intriguingly diverse particularly in floral traits important for the plant-pollinator interaction; (ii) plant-pollinator interactions are one of the most abundant type of species interaction and one of the most diverse in terms of trait variation and diversity; and (iii) polyploidisation is strikingly prevalent in flowering plants. However, only few studies have investigated how variation in complex floral traits, such as scent, has originated and how it is maintained, inherited, and shaped by selection imposed by locally differing species interactions. The interaction between the plant genus Lithophragma (Saxifragaceae), their highly specialised seed parasitic Greya moth pollinators (Prodoxidae), and local generalist pollinators has become a model system to study geographic mosaics of coevolution between plants and pollinators. In one Lithophragma species, L. bolanderi, chemical and morphological floral traits important for the interaction with the specialised moth pollinator are tremendously variable, which contradicts the prediction that such traits are subjected to strong stabilising selection. This species also comprises at least three major ploidy types, warranting studies of the effects of polyploidisation on complex floral trait variation. The overarching aim of this project is to elucidate how polyploidisation affects the diversity and evolution of complex floral signals. This is addressed by combining controlled experiments in the greenhouse, laboratory, and field with thorough field observations. Both traditional and technically highly sophisticated methods are used. © PostDoc: Dr. Karin Gross In collaboration with  Dr. Magne Friberg,  Prof. John N. Thompson This project has been and/or is financially supported by: