The Choice for Europe since Maastricht – Concept

The theoretical framework of the project is situated in political science literature and builds on the intergovernmental integration theory and the comparative political economy research. Our underlying assumption is that member states’ governments have distinct identifiable preferences that can be linked to domestic economic structures, fiscal policies and institutions. For example, we expect that the size and international orientation of the domestic financial sector determine a government’s position on banking regulations. However, governments’ preferences may not simply be a function of the domestic economic and fiscal structures, as our main argument claims. For example, voter preferences and constitutional rules also influence governments’ preference formation. As a further alternative explanation, we aim to analyze whether decision makers rather reacted to external problem pressure. The more recent adoption of the European Stability Mechanism, for example, suggests that external (market) pressures were critical drivers of economic integration. The external pressure argument is alternative to our main argument, if the recent integration steps were mostly functional reactions of member states’ governments to pressures. It is  more complementary, however, if external pressures did not change core positions but made member states’ governments more willing to integrate.
The empirical research strategy of our project is divided into three steps. 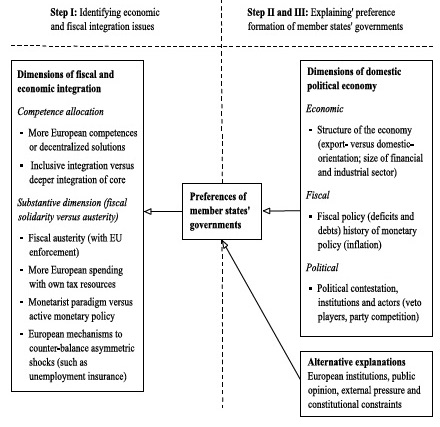