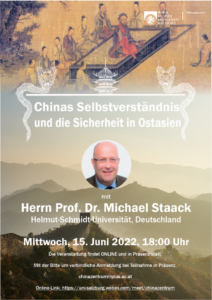 Abstract: East Asia is in a state of inadequately contained security dilemma, which the increasing degree of economic interdependencies has so far only been able to reduce to a limited extent (Asian Paradox). China is not (yet) big enough to be able to hegemonically determine the region, but too big to fit into the region as an equal among equals. On a global level, military modernisation in China will not pose a challenge to the USA for the time being. In the East Asia region, however, it limits America’s options, which sees its hegemony threatened. Against this background, a policy appears necessary that does not promote hostility, opposes decoupling and containment, criticises China very clearly where necessary, but does not demonise it, and continues cooperation formats with China. Such a policy could be pursued by the European Union. A further securitisation of all issues and relations in the Indo-Pacific and an even greater dominance of the major American-Chinese conflict over the region’s own dynamics is likely to lead to a further solidification and intensification of the conflict.

10th May 2022
Lecture: “The Noble and the Ox: China’s Elites and their Moral Compass”

Speaker: Prof. Dr. Helwig Schmidt-Glintzer
Abstract: The rise of China is explained by the interplay of internal and external factors and has come to shape the global world order. China’s modernisation under the leadership of the Communist Party can only be understood as part of an elite concept. Like elites around the world, China’s elite is positioning itself in the face of global challenges, and the outcome of this effort will shape the 21st century. A prerequisite for a perspective of success is the ability to negotiate conflicts of interest and, above all, knowledge of the respective self-understanding and the different value horizons. The lecture will show that a common moral compass can only be found if the vital interests of all actors are recognised. An understanding of China’s development dynamics among the advanced industrialised countries is of central importance here. 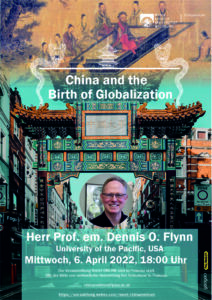 Abstract: Globalization began when all heavily populated landmass regions became connected, after 10,000 years of hemispheric isolation due to global warming that raised ocean levels hundreds of feet (at the end of the last Ice Age). The Pacific Ocean comprises one-third of earth’s surface; the Americas (plus the Atlantic Ocean) comprise another one-third; hence, the AfroEurAsian Old World (including the Indian Ocean) evidently must occupy the remaining one-third of earth’s surface. Reconnection of the New World with the Old World during the 16th century – via both the Atlantic and Pacific – yielded one of the most significant transformations in the history of humanity. The final linkage between the Old World and the New World linkage involved the founding of Manila as a Spanish entrepôt in 1571: the Birth of Globalization occurred when all three one-thirds were finally connected. Understanding motivations behind these linkages requires analysis of the main item imported into China (silver, mostly from Japan and Spanish America, but also from Central Europe during the 15th century before globalization). The main Chinese exports that exchanged for the white metal included silks, ceramics, tea [later), and many other items. The astounding magnitude of early globalization requires investigation of connections that go far beyond economic issues alone. Powerful epidemiological, ecological, demographic, and cultural exchanges were intertwined for centuries leading up to globalization forces that exist today. Although my intent is mostly discuss historical aspects of the birth of globalization process in this lecture, I do hope to also provide at least a brief introduction to the kind of economic theory that, I believe, demonstrates why archival historians are essential for creation of a (currently non-existent) field that can be thought of as Global Wealth History.

22nd March 2022
Lecture: “The China Policy of the West – on the Difficulty of Dealing with a New Global Power”
Speaker: Prof. Dr. rer. pol. Eberhard Sandschneider 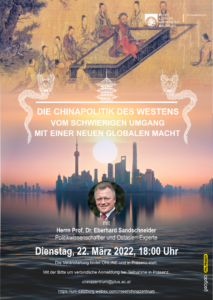 Abstract: In dealing with China’s rise, the West has not yet found a promising strategy. China debates in our media are characterised by polyphony and naivety; politically there is a lack of fundamental China competence to understand how the “Middle Kingdom” functions internally, what global ambitions it has and what meaningful strategies could be used in dealing with the rising star of the 21st century. “We’re just bumbling around and indulging in diplomatic talk” is how a former top EU official puts it, and it gets to the heart of the problem. Everyone wants to do business with China. But as the huge Chinese market almost magically attracts Western companies and investors, the tension between values and norms remains the big hurdle in dealing with China in an amicable way.

19th January 2021
Lecture: “The world as a common possession – China between Confucianism, Marxism and democracy” 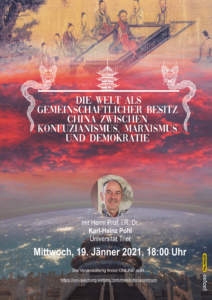 Lecturer: Prof. i.R. Dr. Karl-Heinz Pohl
Abstract: The Confucian tradition is about 2,500 years old. The teachings of Confucius have thus shaped life in China and in the surrounding countries in a comparably lasting way as the teachings of Christianity have in Europe. Confucianism had a particularly formative effect on the political structure of China. This lecture explored the most important concepts in this regard, such as “people as the basis” (民本 min ben), “harmony” (和 he), “world as a collective belonging” (天下为公 tianxia wei gong), “modest prosperity” (小康 xiaokang), etc., and explores similarities with Chinese-style Marxism. In doing so, it becomes clear that not only China’s pre-modern, but also its modern state system can be seen as a meritocracy. Finally, questions are discussed as to how compatible modern Western conceptions of democracy are with traditional Chinese conceptions of order, or whether or to what extent the latter still have relevance for the solution of current problems. It becomes clear that the question of whether a Western-style democracy for a country of 1,400 million people (with problems of a corresponding magnitude) is currently the best solution for China, can certainly be answered controversially. 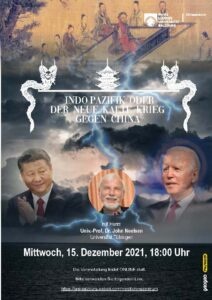 Abstract: “Indo-Pacific”, is more than a geographical space, it is a concept that signals the shift of the global economic-political centre of gravity from the Atlantic to the Pacific, with China at its centre. At the same time, it signifies the paradigmatic decline of the West, especially its leading power, the USA.This lecture first outlined China’s resurgence after colonialism and civil wars in the wake of Deng’s reforms. The New Silk Road (BRI) symbolises this rise to what will soon be the world’s largest economic power. In the following, the imperatives of Chinese foreign policy were analysed in the context of the internal material development conditions of the People’s Republic on the one hand, and the security environment in the Asia-Pacific region on the other. They form the framework for the subsequently detailed policy of the USA to prevent the rise of China as an economic competitor, and technologically in terms of alliance policy and militarily after the failure of “G2” and “Chimerika”. It crystallises in the concept of “Indo-Pacific” as a strategy of securing hegemony. Thus, on the one hand, it means the systematic operational connection of the corresponding US naval units, and on the other hand, the political-strategic space of encircling the PR with the inclusion of India and the mobilisation of EU/NATO countries. Finally, possible causes and focal points of a war (Taiwan, South China Sea) were envisaged in this intensifying confrontation.

Lecturer: Mag.a Emanuela Hanes
Abstract: At the time of reform and opening-up, Deng Xiaoping announced with the Four Modernisations a development of the Chinese economy, at the end of which China should become a global leadership position. These 100-year goals, Xi Jinping’s “Chinese Dream”, the Belt and Road Initiative (BRI) and numerous other initiatives and strategies can be classified under this planning framework. Especially since the Corona Pandemic and the Dual Circulation and Decoupling Plans, the impact of these strategies on Europe has become increasingly clear. Supported by her own expertise as a sinologist and intercultural trainer, Emanuela Hanes interviewed numerous experts, companies and organisations in the DACH region for over a year to gain first-hand insight into dealing with Chinese partners. The results paint a similar picture across all sectors and in the entire DACH region: the need for more China expertise, for more knowledge about relevant economic and geopolitical strategies that affect companies in China. Based on this information, she proposed an informed China strategy for companies in the next years. The presentation offered an overview of the results, the most relevant strategies from the Chinese side, recommendations for action for strategic positioning, and was rounded off with several concrete intercultural soft strategies as best practices that have proven themselves in practice. 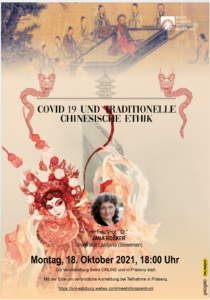 Abstract: This presentation showed the relationship between different models of ethical systems and their implications for crisis resolution strategies. As COVID-19 (similar to current ecological problems) is a crisis of global proportions, it can only be solved through global cooperation. In this framework, it is important to consider knowledge and ethical views from different cultures. In this context, some theoretical foundations for alternative models of social ethics were outlined from the perspective of traditional Chinese, especially Confucian philosophies. This perspective is important, among other things, because the pandemic has so far been brought under control much more quickly and effectively in Chinese-speaking areas than in other regions of the world. In this context, Chinese philosophy of life was first introduced and its current relevance highlighted; the traditional Chinese model of relational and anti-essentialist concepts of the self was then presented and its implications for Confucian models of social ethics, cooperation and solidarity was explored. On this basis, some new ways of understanding interpersonal and intercultural interactions can be pointed out, which might help to develop new strategies against current and future pandemics.