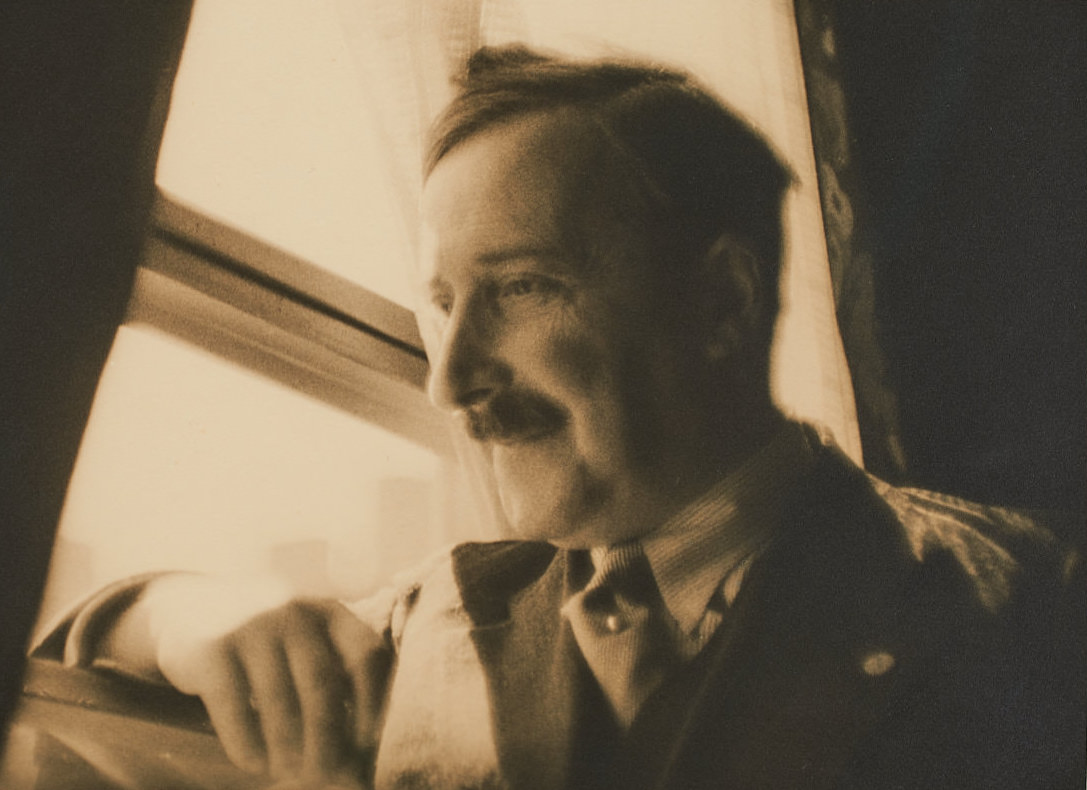 The Literature Archive Salzburg preserves the largest European collection of materials from the estate of Stefan Zweig, which includes diverse documents from different work and life contexts.
In 2014, the University of Salzburg succeeded in bringing a particularly valuable Stefan-Zweig-collection from London to Salzburg. The London collection (Archiv Atrium Press) comprises 55 manuscripts and typescripts of Stefan Zweig’s works, including 13 mostly spiral-bound notebooks with his own handwritten notes. It is thus the most important surviving collection of the author’s literary notebooks, which are extremely informative about his working methods. Zweig’s works, notebooks and diaries from the London collection, as well as other works from the other collections, are listed in their entirety on the portal  www.stefanzweig.digital. The London holdings also include a repository of around 450 of Zweig’s journalistic works, which are currently being catalogued, as well as life documents, correspondence, collections of reviews and photographs, which are listed. The holdings are enriched by several archive boxes of documents from the publishing house Atrium Press, including copies of numerous letters by and to Stefan Zweig.

Collection Adolf Haslinger
Since the establishment of the Salzburg Literature Archive Foundation (today Adolf Haslinger Literature Foundation) by Adolf Haslinger, Zweig archival materials have been acquired regularly. In the collection of autographs of Adolf Haslinger there are today, for example, a notebook of Stefan Zweig on his trip to Russia in 1928, a manuscript of the chapter “Secret of Alcoven” from the novel biography Marie Antoinette, which deviates considerably from the printed version, as well as a typescript with numerous annotations to the novella Verwirrung der Gefühle.

Collection Anna Meingast
Wilhelm Meingast, the son of Zweig’s Salzburg private secretary (1919 to 1938) Anna Meingast, generously donated Zweig’s works, letters and life documents from his mother’s collection to the Literature Archive in December 2000. Zweig’s works preserved by Anna Meingast include a notebook to the essay on Kleist, published in Der Kampf mit dem Dämon. Hölderlin, Kleist, Nietzsche (Leipzig 1925), and manuscripts for essays on Freud and Mesmer, published in Die Heilung durch den Geist. Mesmer, Mary Baker-Eddy, Freud (Leipzig 1931), and another manuscript on the novel biography Marie Antoinette. In addition, the collection contains a stapled typescript with manuscript notes on Castellio gegen Calvin oder ein Gewissen gegen die Gewalt (Vienna 1936). Considered a biographically and sociologically equally significant piece of the collection is Stefan Zweig’s so-called „Hauptbuch“. The volume, which with its large-format tables on one double-page spread each is reminiscent of an account book, was intended to list all of the author’s works and thus provide an overview of the numerous translations, licensed editions, rights and the associated income.
In addition to these outstanding pieces, the Meingast Collection includes over 260 postcards addressed to Stefan Zweig, including those from Martin Buber, Alfredo Cahn, Ernst Deutsch, Franz Karl Ginzkey, Hermann Hesse, Felix Angelo Pollak, Viktor Wittkowski, and Otto Zoff. In addition, documents from the Salzburg office have survived, including letter cards, checkbooks and business cards, as well as Stefan Zweig’s Underwood travel typewriter, which can be seen in the permanent exhibition of the Stefan Zweig Center. In addition to correspondence with Stefan and Friderike Zweig, among others, three stenographic diaries by Anna Meingast are accessible in Salzburg, which provide insight into her everyday life.

Collection Harald Böck
In May 2013, the Literature Archive Salzburg acquired documents from the possession of Zweig collector and librarian Harald Böck. They include eleven letters and postcards by Zweig, among others to Hermann Bahr, Joseph Roth and Paul Zech, as well as 14 pieces of correspondence from the author to Ami and Maria Kaemmerer, Harald Böck’s great-grandparents. Stefan Zweig had published an obituary of Ami Kaemmerer in 1927 under the title Gedächtnis eines deutschen Menschen. In addition to journals and anthologies with contributions by Stefan Zweig and translations by him, Böck’s library also contains first editions; the most important of these are two editions of the Schachnovelle.

Collection Donald Prater
In 1995, the collection of the English literary scholar, diplomat and Zweig biographer Donald A. Prater was acquired. In addition to Prater’s correspondence with Friderike M. Zweig and Richard Friedenthal, among others, the collection includes extensive documentation of Prater’s research on Stefan Zweig, the most significant result of which is the 1972 published biography European of Yesterday. A Biography of Stefan Zweig (an expanded edition was also published in Germany in 1981). Donald A. Prater’s research library, which was also acquired, contains nearly 1000 volumes of primary and secondary literature on Zweig and is on permanent loan to the Stefan Zweig Center.

Collection Knut Beck
In 2013, S. Fischer Verlag donated to the Literature Archive the work materials of Knut Beck, Stefan Zweig’s longtime lector and editor of his works. The papers document, among other things, Beck’s labors on the 36-volume edition of his works, the four volumes of letters he edited, and the edition of the diaries. This collection contains numerous copies and microfilms of Zweig’s correspondence, including 25 folders of Zweig’s letters arranged chronologically from 1898-1942.

Publishing archives of Atrium Press and Williams Publishers
With the expiration of the copyright to Zweig’s work at the end of 2012, the publishing house Atrium Press Ltd. in London was dissolved. The Literature Archive Salzburg therefore received the entire publishing house archive as a gift in the summer of 2013. In addition to publishing materials, the ten-shelf meter collection contains, for example, the worldwide administration of the rights to Zweig’s work, the correspondence of Richard Friedenthal, the first administrator of Stefan Zweig’s estate, as well as comprehensive documents of Zweig’s long-time publisher and rights holder Kurt Leo Maschler.
In 2014, the Literature Archive also received an extensive collection of publishing materials on Stefan Zweig from Williams Verlag AG (Zurich), the sister publisher of Atrium Press, through the mediation of Managing Director Lindi Preuss.