The Literature Archive Salzburg preserves the largest European collection of materials from the estate of Stefan Zweig, which includes diverse documents from various work and life contexts.

The Salzburg collection includes over 50 literary manuscripts, 13 previously unanalysed notebooks with handwritten notes and manuscript drafts, life documents, correspondence, review collections, and photographs. As an important supplement to the printed texts, the Literature Archive Salzburg is hosting the new website  www.stefanzweig.digital since June 9, 2018, on which the literary estate of Stefan Zweig is made accessible. 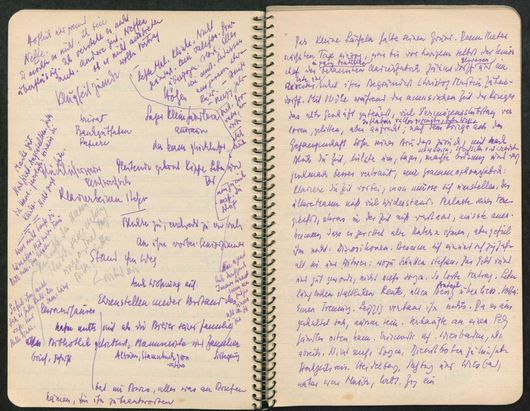 The first phase of the project (since January 2017) will initially focus on Stefan Zweig’s work manuscripts held in Salzburg as well as those of the Daniel A. Reed Library of the State University of New York in Fredonia (USA), which holds another comprehensive part of his estate and has been acquired as a project partner.The sources will be catalogued and indexed on the basis of a uniform set of metadata oriented on common rules (RNA, DACS). The holdings in Salzburg will be indexed in detail and gradually made openly available online to a worldwide public in digital facsimiles.
Further parts of the estate, such as life documents and correspondence, are to follow. In addition to the original documents, the SZD project can draw on several outstanding secondary sources, some of which were created over decades and can now be used adequately for the first time. These include an extensive work index, a life calendar, and reconstructions of Zweig’s private library and his autograph collection.
All of these data collections, which until now could only be used to a limited extent and as individual sources, will be linked to each other as well as to the work manuscripts and thus placed in relation to each other. The resulting network should make it possible to answer a wide range of research queries on the bilingual website (German/English).

The project STEFAN ZWEIG DIGITAL is under the direction of Manfred Mittermayer. Lina Maria Zangerl is responsible for it at the Literature Archive Salzburg. The project is realized in cooperation with Stefan Zweig expert Oliver Matuschek, the Center for Information Modeling at the University of Graz and Fotohof Salzburg.