In the context of a cooperation, the Literature Archive Salzburg is in charge of the literature section of the online version of the Salzburg Kulturlexikon 3.0, which is supported by the ARGE Kulturlexikon at the University of Salzburg.

Base of the repository are the articles of the 3rd edition of the Salzburg Kulturlexikon (edited by Peter Mittermayr and Heinrich Spängler), which was published in 2019; the first edition of the reference work was published in 1987 (2nd edition in 2001, both edited by Adolf Haslinger and Peter Mittermayr). The individual contributions are continuously updated and extended by further lemmas. The Salzburger Kulturlexikon Online is a knowledge platform on the culture of the province of Salzburg. Its goal is to provide scientifically validated knowledge about the cultural development of Salzburg. Institutions and personalities are presented that have long-term significance for Salzburg and/or have attracted supra-regional attention.

The work on the individual thematic areas of archaeology, architecture, fine arts, literature, media, music, folk and everyday cultures as well as science and history is led in each case by experts; the area of literature is the responsibility of Manfred Mittermayer.

The entire scientific team of the Literature Archive was involved in the editing of the individual lemmas, most of which had already been included in earlier editions of the Kulturlexikon and were fundamentally revised for the third edition; in addition, further authors from the university field and the Salzburg literary scene were involved. 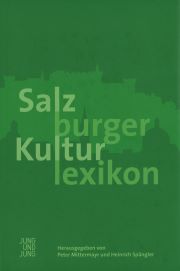 The individual articles of the literature section can be found  here.