One focus of the research and publication activities at the Literature Archive Salzburg is dedicated to the Austrian author Thomas Bernhard (1931-1989), who has been translated into more than 40 languages worldwide.

After individual volumes of prose, Die Ursache (1975), the first of a total of five autobiographical stories by Thomas Bernhard, was published by the Residenz Verlag, which was then and is now again based in Salzburg. In addition to the years that shaped his youth, the author and the city are also connected by his studies at the Mozarteum, his journalistic career, and not least his successful collaboration with the Salzburg Festival.
The archive of the Residenz Verlag, which is part of the holdings of the Literaturarchiv Salzburg, contains numerous documents that are important for researching the history of the author’s life and work (above all correspondence, but also copies of individual work typescripts). 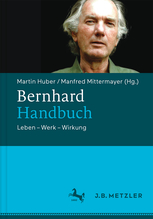 Among the most important publications of the Bernhard-Research at the Literature Archive are, besides the volumes written by Manfred Mittermayer, Thomas Bernhard. Eine Biografie (Salzburg, Vienna: Residenz 2015) and Das Salzburg des Thomas Bernhard (Berlin: Edition A.B. Fischer 2017), the Bernhard-Handbuch. Leben – Werk – Wirkung (Stuttgart: Metzler 2018). It includes 93 individual contributions by a total of 67 researchers on all of the author’s works, on aspects relevant to the history of his life and works, as well as on Bernhard’s international impact and reception, which extends far beyond the German-speaking world. The handbook is supplemented, among other things, by an extensive bibliography.

In 2015, the 22nd and final volume of the Thomas Bernhard Werkausgabe was also published by Suhrkamp Verlag (Berlin). It is dedicated to the journalistic works as well as the speeches and interviews of the author and was edited by Wolfram Bayer, Martin Huber, and Manfred Mittermayer. Editions and commentaries of the texts published during Bernhard’s activity as a journalist for the Salzburger Demokratisches Volksblatt and other newspapers were prepared in the Literature Archive. Since the establishment of the LAS, the content of the Bernhard-Tage, which take place annually in October in St. Veit, has also been planned there in close cooperation with the Department of German Studies.