New morphologic and genetic features have been discovered in tintinnid ciliates, microscopic unicellular animals with minute, hair-like appendages, collected in the Mediterranean and North Atlantic. The data contribute to a better understanding of the species limits and the evolu­tion of tintinnids and their relationships. Tintinnids seem to be an important component of the marine planktonic food web as they feed on bacteria and toxic algae and are preyed upon by small multicellular animals (e.g., fish larvae). The main feature of tintin­nids is the 20–1000 µm long lorica (house), which is vase-shaped or tubular and has a hya­line (clear) or agglom­erated (covered with environ­mental particles) structure. Since their dis­covery in the year 1776, about 1200 species in 75 genera and 15 families have been de­scribed, using merely lorica features, which turned out to be unsuitable for a natural classifi­cation, as species often form different kinds of houses. Reliable features are, however, poorly known, viz., cell mor­phology and genes have been studied in only 3 % of the species.

During the project, a mem­branous sac, that closes in disturbed specimens, was found in the loricae of four genera be­longing to three families. Since live observation and scanning electron micros­copy revealed an identical ultrastructure and functionality of the sac, indicating a common origin, the four genera were united in one family despite distinct differences in their lorica structures.

In gene analyses, the genus Favella formed two distantly related groups. Now, light and electron microscopy showed conspicuous differences in their cell features and lorica wall ultrastructures. Hence, the genus Favella was split, a new genus was established, and the 39 species were assigned.

In nature, foreign particles hide the lorica matrix of Tintin­nopsis parvula. Houses formed in particle-free cultures, however, revealed the wall matrix, which differed from that found in related species. The wall ultrastructure thus represents a promising feature for a split of the species-rich genus Tintinnopsis in the future. Using mod­ern methods, this and further insufficiently known spe­cies were redescribed based on several populations each. Additionally, 16 new gene sequences were obtained to study the temporal and spatial variability within and the relationships between tintinnid species. The sedimenta­tion of loricae represents a huge material flux in deep water layers. To understand the remin­eralization and fossilization processes, the chemical composition of the houses was studied by diverse staining methods, enzyme experiments, and extreme transmission electron microscopy (resolution < 20 nanometre). The interpretation of morphologic features in tintin­nids often requires a comparison with their naked relatives. In both groups, the evolution and re­lationships can perfectly be inferred from certain cell features and genes. Although the majority of these organisms probably has a cosmopolitan distribution in the sea, some species are very likely endemic and thus should not any longer be excluded from conserva­tion issues. 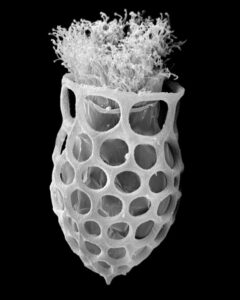 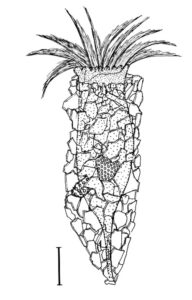