Foreland basin evolution records the effects of plate reorganization, surface evolution and crustal deformation on mountain building. In this project, we constrain the long-term exhumation of the alpine foreland basin using low-temperature thermochronometry.

Project Summary:
The influence of plate reorganization and associated slab dynamics on mountain building and exhumation is increasingly recognized in many regions around the globe (e.g. von Hagke et al., 2016). However, these deep signals may be masked by tectonic or climatic forcing, and it is difficult to isolate and quantify the exhumation signal from slab dynamics. Whereas the thermochronological signal of the stacking of thrust sheets in the orogen can overwhelm subtle signals related to mantle processes, the foreland basin records large-wavelength subsidence or uplift. Existing data show that sediments in the entire basin must have experienced high exhumation rates, even in distal, undeformed parts. A possible explanation of this long- wavelength exhumation signal are deep lithospheric processes. We do however not know if this signal persists along strike, i.e. also in the central Molasse Basin, and if so, how much timing and spatial extent differs from the signal in the west. However, the data suggest it is possible to use data from the Molasse basin to constrain the contribution of mantle dynamics to surface evolution.
Tectonic forces and mantle processes vary strongly along strike in the Alps, and so does their expression in the burial and exhumation history of the adjacent foreland basin. Following its initial stage as a classical foreland basin, the Molasse basin has undergone substantial exhumation (~2-3 km) during the Neogene, which can only partly be explained by known tectonic processes. The entire basin has been exhumed to a degree that is sufficient for low-temperature thermochronometers to map the timing and rate of exhumation at high resolution. Within this project, we will test the following hypotheses:
1.        Mantle signals have distinct expressions in the exhumation of the whole Molasse basin, and not only on its western side.
2.       Mantle-related exhumation of the Molasse Basin is different in the central and the western part of the basin
3.       Much of the exhumation of the Molasse basin in the western part is related to slab roll back or break off, whereas in the Eastern Alps it is the result of polarity reversal and lateral extrusion
To do so, we build on our work in the western part of the basin to quantify the exhumation history of the central Molasse Basin using low-temperature thermochronology along three transects. We will quantify the timing and rate of exhumation using a new probabilistic thermal model specifically designed for studies of sedimentary basins in combination with tectonic reconstructions (Fig. 2). With this combination, we aim to quantify the contribution of tectonic, climatic and mantle drivers to exhumation of the Molasse basin. 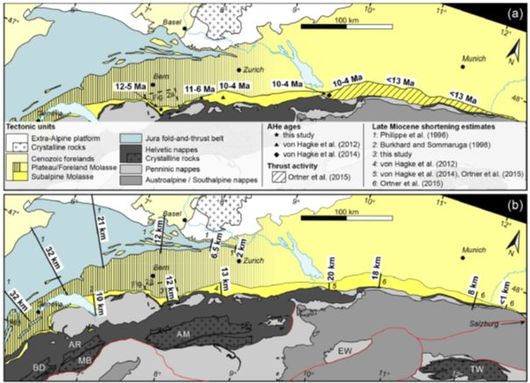 Figure 1: Timing and amount of shortening of the Subalpine Molasse and thr Jura fold-thrust belt. This shortening can only explain parts of the exhumation witnessed in the basin. Within this project, we aim to quantify the amount of basin exhumation, and gain insights on the underlying driving mechanism. (Figure from Mock et al. 2020) 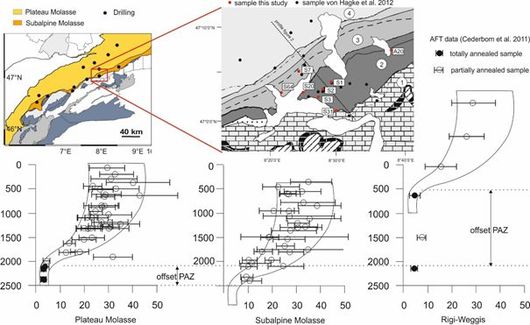 Figure 2: Thermochronological data from the Swiss Molasse Basin (compiled from Cederbom et al. 2011). There is no obvious difference in exhumation between the Subalpine Molasse and the Plateau Molasse. Furthermore, the data from Rigi (including new data) does not fit in the general pattern, which may be explained by hydrothermal fluxes.
Further Reading: