Tintinnid ciliates are unicellular organisms (protists) that play a considerable role in the planktonic food webs of the global oceans. The about 1,000 species form diverse vase-shaped shells (loricae) which are extremely resistant against decomposition even by the strongest acids and bases hampering chemical analyses. Thus, the lorica material has highly interesting properties but its fate in the nutrient cycles of the oceans is still unknown. The tintinnid cell is attached to the bottom of its lorica by a peduncle and propagates by fission. During each fission, the anterior mother cell accumulates and secretes material as minute granules to form a new lorica, while the daughter cell keeps the old lorica. Preliminary data suggest that the lorica forming material contains proteins and that the building processes vary between species.

Ciliate experts at the Department of Environment & Biodiversity of the Paris Lodron University of Salzburg (Sabine Agatha and Maximilian Ganser) will employ an innovative multidisciplinary approach focussing on how the lorica forming material is generated and which genes are potentially involved. Light and confocal laser scanning microscopy will be employed to estimate the production rates and amounts of lorica forming material in different stages of cell fission. Transmission electron microscopy will be used to study the ultrastructural characteristics and differences in the lorica forming granules. The production of the lorica forming material involves the transcription of the nucleus-encoded genes in messenger RNAs (mRNA) which are subsequently translated into proteins. Transcriptome analyses of the various mRNAs occurring in single tintinnid cells in different stages of fission will provide the first baseline of highly expressed genes in tintinnids. Subsequently, genes potentially related to the generation of lorica forming material will be identified by comparing the transcriptomes of tintinnids with those of closely related species that are not able to build shells (aloricate). The project will not only provide novel data on tintinnids and their aloricate relatives, but also extend our knowledge on previously unknown genes and gene functions in this important group of planktonic protists. These findings will contribute to elucidate the mystery of the extremely resistant tintinnid shells puzzling scientists since about 140 years. 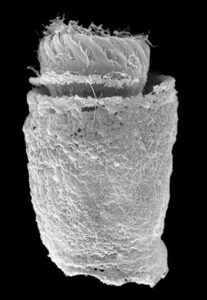 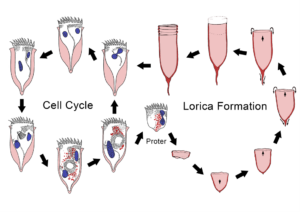 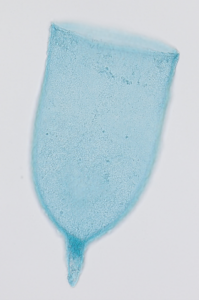