EPIGENETICS OF IMMUNITY IN CANCER (ITAT1054)

Joint research programme of the universities Bolzano, Trieste, Udine and Salzburg investigating the effects of epigenetic modifications on immune cells in malignant diseases

MOLECULAR IMMUNOLOGY & SIGNAL TRANSDUCTION
Within the last eight years, my team has focused on molecular mechanisms mediating the crosstalk between the innate and the adaptive branch of the immune system. We investigate signaling processes and feedback regulation in primary human immune cells with a strong focus on dendritic cells (DCs), because these cells have the unique potential to translate signals issuing from innate immune cells into productive adaptive immune responses, which are not only crucial for maintaining health, but also play an important role in immunological disorders, including cancer and allergies. We are especially interested in dysregulated cytokine signaling within the myeloid compartment of the immune system and the consequences for adaptive immunity. Currently our main research interest lies on the following three research topics:

1) AML (acute myeloid leukemia)-derived cytokines and their action on cells of the immune system
Acute myeloid leukemia (AML) is an aggressive type of blood cancer and the most common cause of leukemia-related mortality. It typically develops in older persons (>60 years) but can affect all age groups. While younger patients are eligible to receive intensive chemotherapy followed by allogeneic stem cell transplantation, the prognosis for older patients remains poor, with a 5-year survival rate of only 10-15%. Thus, there is an urgent need to develop alternative treatment strategies to improve clinical outcomes. Given that numerous cytokine-based drugs are already FDA-approved, a better understanding of cytokines and their role in AML may open new paths for novel strategies to treat AML. We are therefore interested in the dysregulated cytokine/chemokine network in AML and study potential consequences on immune cells. 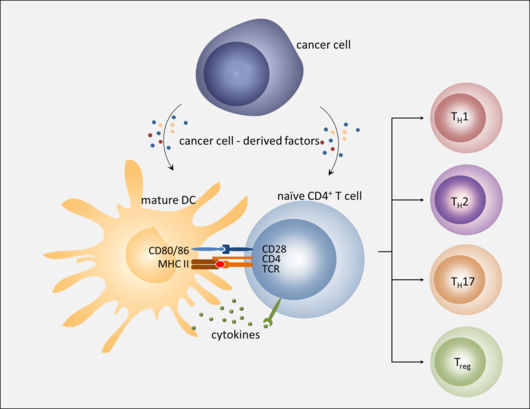 2) Immune responses induced by Helicobacter pylori and consequences for T cell activation
Gastric cancer, one of the most aggressive malignancies, is the fifth leading cause of cancer-related mortality worldwide. Persistent infection with the human pathogen Helicobacter pylori (H. pylori) has been identified as an important risk factor in the development of gastric cancer; consequently, H. pylori has been classified as a group-I carcinogen. In gastric tumor samples, the presence of increased numbers of regulatory T cells (Tregs) which actively suppress effector T-cell responses is likely a key feature in the development of H. pylori-associated gastric cancer. It is becoming increasingly evident that the phenotype of dendritic cells (DCs) dictates their activation profile and determines their ability to prime T cell responses. However, many of the underlying control mechanisms of DCs remain unclear. We are therefore strongly interested in H. pylori-induced activation/maturation of DCs, and the functional consequences of both processes for T cell responses. 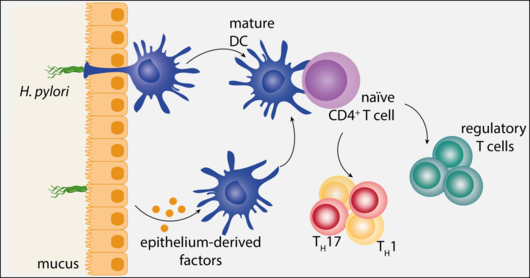 3) NLRs and NLR-dependent activation of immune cells in allergy
Despite the fact that allergic diseases represent a significant health problem in the 21st century, the pathophysiology of this Th2 cell-mediated immune dysfunction is still not fully understood. Various factors including genetic susceptibility, allergen source and dose, structural features/stability of allergens and the route of exposure play key roles in this complex disease. To further elucidate the role of the allergen itself in this process, we recently compared the effects of recombinant, highly purified birch pollen allergen with birch pollen extracts. Those studies indicate that not the pure allergen itself, but the allergen extract is capable of inducing immune responses, indicating that especially the allergen context may play a crucial role in promoting allergic reactions (Strasser et al, 2017, Aglas et al 2018). This finding is in line with previous observations showing that allergen extracts are more efficient when used in immunotherapy than recombinant allergens. We hypothesize that in addition to the intrinsic properties of an allergen, the microcontext in which the allergen is delivered (e.g. microbial contaminations), may fine-tune the allergen-dependent immune response. Therefore, our studies focus on the role of NLRs and on the activation of NLR/Inflammasome complexes by microbial components delivered in the context of allergen exposure. 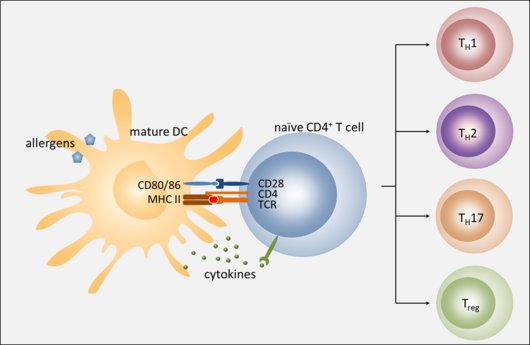